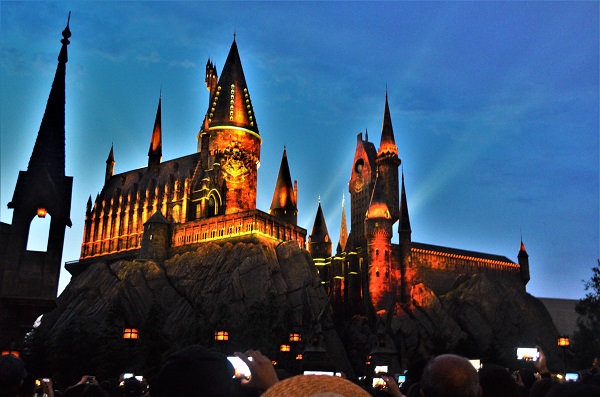 This sixth day in Japan was our last day of traveling in Japan, because on the seventh day we went straight to the airport so we didn’t have time to go out again.

Our main destination in Osaka is to go to Universal Studios Japan. We put the main attractions on the last day so that the climax of our travel story 😛 Yes, and it is true that of all the places I visited in Osaka, USJ is the best. We are very satisfied playing at USJ from morning to night again. If you go to Osaka, this USJ is really a must visit. Although the price of admission is quite expensive, it’s worth it.

Update March 2020: USJ is now closed from February 29th – March 15th, 2020 due to Corona Virus. Have a possibility to be extended, depends on the situation.

Because we did not buy USJ’s Express Pass tickets, I read on the internet that many suggested coming earlier. USJ’s opening hours were 9am local time. So it should have arrived at USJ around 8 o’clock in the morning. But finally we arrived at USJ at 08.30.

Once we arrived at USJ, we immediately looked for the entrance. It turns out that it’s already very crowded people who are waiting in line to enter USJ. Since we already bought the tickets at Klook, we just need to wait in line to enter the USJ, no need to queue to buy the tickets again. Oh yeah, redeeming the tickets is really easy. All you have to do is scan the barcode from the e-ticket. It can also be directly from the Klook app.

The Wizarding World of Harry Potter

About 30 minutes we were waiting in line. At 9 o’clock we entered the USJ. After that we immediately ran to The Wizarding World of Harry Potter. So in this USJ the most famous is the Harry Potter. People say you can queue for about 2-3 hours. Understandably The Wizarding World of Harry Potter is only at Universal Studios in the US and Japan. Instead of going all the way to the US, it’s better to be close to Japan, that’s why it’s so crowded here.

Once we entered The Wizarding World of Harry Potter, we entered the Hogsmeade village first. In the Hogsmeade village there are Hogwarts Express, Butterbeer, posters or movable items and sounds, shops that sell souvenirs, and even rent Harry’s costume houses and their wands. If we go inside, we will see Hogwarts Castle. Well, the main attractions here is Harry Potter and the Forbidden Journey, which is inside Hogwarts Castle.

Because our goal is to play the rides first, we headed straight to Hogwarts Castle and haven’t had time to explore Hogsmeade Village. We run as much as we can, even though the bag strap for my backpack is broken LOL, but in result we didn’t have to queue that long. Luckily my bag is multi functional, it could be a normal woman bag 😀 So we queued this ride for about 1 hour. Pretty good for saving 1-2 hours right, thanks to our run LOL.

We also had to put all our belongings in the locker, including cellphones and cameras. After that it turns out there is a spot inside this Hogwarts Castle, where we see there are many posters with pictures of people whose eyes are moving and talking to themselves. But they speak in Japanese LOL. Then there is a room that looks exactly like Harry Potter. Moreover, the atmosphere in the castle really get it. This is really good, I want to take a photo but I can’t bring a cellphone or camera 🙁

Finally we took this ride too. It turns out that here we sit with the safety provided too. Luckily I didn’t bring my cellphone or camera. Apart from the fact that there are no pants pockets, I’m afraid to fall too. Here we were invited into the world of Harry Potter, where we seemed to be one of the characters in the Harry Potter. In front of us there is a screen showing the Harry Potter films. We joined to fly, joined the competition, joined to face the ghosts, etc. So that was the chair that we sat rocking around in such a way that we felt it was a real experience. Really great! One of the best experience! 😀 No regrets waiting about 1 hour to play this ride.

After that, we took our bags and belongings again and immediately left Hogwarts Castle. Actually there is a roller coaster ride in The Wizarding World of Harry Potter, the Flight of the Hippogriff. But we didn’t go there, instead we went to Jurassic Park.

In this Minion Park we took the Despicable Me Minion Mayhem, where we seemed to be transformed into a Minion first to feel the world of the Minions. We queued for around 1-2 hours. If it’s really worth it, it’s okay, but in my opinion this Minion is just so-so. Not worth the queue time. The only thing I like in Minions is in the park. There are many Minion statues where we can take photos. Next we went to the New York area.

This New York area was made as if we were in New York. If the rides itself there is The Amazing Adventures of Spider-Man The Ride. We also queue up for about 1 hour. This spiderman ride concept is similar to Harry Potter, where we sit in a rocking chair. There is also a screen in front of it, so we seemed to be invited to join the Spiderman’s adventure. There are effects of water, fire, wind too. So it feels hot or cold. But for the whole thing, I still prefer Harry Potter.

I swear, Space Fantasy is really good. We are invited to see the beauty of the stars, planets other than earth, asteroids, etc. I was amazed to see the beauty of this space. Near the end of this ride, I had a chance to chat with the Japanese guy. But because he couldn’t speak English, we ended up just talking briefly. Once the ride is over, he bends around 90 degrees as a farewell. So niceeee, isn’t it? 🙂

When we sat on this Roller Coaster, I realized that there was a button that could be pressed and it turned out to play music. Yeah, so behind our chairs there are speakers. At that time I pressed number 3, apparently it was Taylor Swift’s song – Shake It Off. This is my first time riding a roller coaster and there is the back sound of the music. So exciting! I can really enjoy, hands on all-in, while singing and even can be a little “dancing” while riding this roller coaster. Incidentally I really like the song Taylor Swift. 😀 This seems like my favorite roller coaster until now. Because it can turn on the music 😀

Actually we have surrounded all areas in Universal Studios Japan, except Water World and Amity Village. Because it seems less attractive. I was going to The Flying Dinosaur at Jurassic Park, but the waiting time is about 1 hour. So finally we decided to enjoy the atmosphere at USJ and just taking photos.

My favorite area is definitely The Wizarding World of Harry Potter. I’m still not satisfied with the photos and exploring Hogsmeade village. We finally got there again. I know I can take photos here wearing the Harry Potter costume along with the magic wand. It just hasn’t been found yet where the rental location is. Finally I just bought Butterbeer here and take photos.

After that we went to San Francisco and New York for taking photos. We are actually waiting for the Night Parade, which starts at 20:00 to 21:00. The time has shown around 19.19. There is still 1 hour left to wait. Because I’m still not satisfied with being in The Wizarding World of Harry Potter, I’m finally alone to go there again. When I got there, I heard a very loud noise from Hogwarts Castle. Suddenly I remembered that there was a Light Show at Hogwarts Castle at night. Wow, I immediately rushed over there to see.

Nighttime Lights at Hogwarts Castle begin at 19.15. The show is only 5 minutes, and usually will appear every 20 minutes. When I got there, at around 19:30 the show began. I really enjoyed this performance. This is just too magical. You must watch and can’t miss it!

After the show was finished, I met my friends again but only 2 people. Two more people are already on location waiting to watch the parade in the New York area. Then, we went around Hogsmeade Village again. Finally found the location of the Harry Potter costume rent. It was next to Hogwarts Express, apparently, near the entrance to Hogsmeade Village.

If you want to wear a costume, it’s actually free. So later we will be photographed using their camera, and if we want to buy we have to pay. The results of their photo have a background like in Harry Potter scene, so we seemed to be riding the Hogwarts Express train. Even though there is actually no background. It’s okay if you want to use our camera or cellphone, you don’t have to pay anymore. But the photos shouldn’t be in the same place as their photo spots. Because we want a free one, it’s enough from our own camera and cellphone.

I wore the Slytherin costume, 2 of my friends wore Gryffindor. It just so happened that because of the three of us, with a composition of 1 woman and 2 men, we felt like a Harry Potter character 😀 Harry Potter – Hermione – Ron, LOL. After that we immediately rushed to New York, because we wanted to watch the night parade.

Once we entered the New York area, people were already crowded to watch this Night Parade. Yes, we also immediately ran towards the very front in order to be seen more clearly. Actually there is also a special viewing area, but have to pay again.

The Night Parade starts from Harry Potter, then continues with Transformers, Jurassic World, and finally Minions. This parade which lasted for 1 hour was really good. What I like most is definitely Harry Potter and Transformers.

Universal Studios Japan is a must to visit in Osaka, Japan. 1 day playing here is still not enough. It can be just if you want to buy a ticket that is 1.5 days or 2 days, but because of the budget and limited time too, we chose 1 day only. My favorite rides at USJ are Harry Potter and The Space. Hollywood Dream roller coaster is also fun. For others, I think it’s ordinary. Maybe the Flying Dinosaur is interesting. 😀