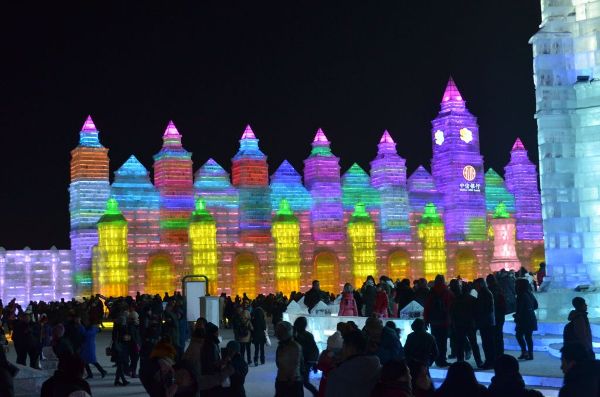 We went to Harbin from Beijing by bullet train and with the modest preparation. Harbin is a small city in China. Harbin doesn’t have so many attractions, the main attractions here are actually Harbin Ice and Snow Festival and Snow Sculpture at Sun Island. Harbin is a must city during winter in China. That’s why we decided to go on January, 16th – January, 19th (4 days 3 nights) 2015.

When in Beijing, we already prepared the winter clothes for Harbin. We also already known which places we want to visit in Harbin, however we hadn’t had the itinerary yet at the time. We planned to make the itinerary at the train, but none of us brought pen/pencil, LOL. So finally we decided to just let it flow when in Harbin. We also still didn’t know where we’ll stay in Harbin. And the only solution that we thought was finding the accommodation by using a taxi. At first we also had a plan to use taxi as our main transportation.

Once we arrived at Harbin station around 11pm, we met the local Travel Agent at station. So they offered us their services (car and driver) to help us finding the hotel at that night. We all agreed with the offer, because it’s almost mid-night already. Besides they looked like so convincing and can be trusted. However at that time, we still didn’t say agree for the services on the next next day. We did some bargains at the car with the driver who also our tour guide. Then we got the best price, 200-250RMB/day. They said it’s the cheapest price ever, didn’t know it’s true or not. At first the driver looked like so angry when I said the price. But I said to him, 我们是学生嘛！我们没有那么多钱”, which means “we are all students, we don’t have much money”. So then the driver called his boss when we arrived at the hotel, didn’t know why his boss agreed with the price. The driver were so surprised because of it, he couldn’t believe his boss would agreed with the price, and even he was shaking his head at that time. Finally we decided to rent the car and driver for the next 2 days. Because on the last day, we wanted to take a taxi in Harbin. Then we informed him our list of destinations in Harbin, so that he could make the itinerary.

That night we stayed at Yanda Hotel 燕达宾馆. It’s a 2 or 3 stars hotel. The price was so cheap, around 100-200RMB for single room (2 persons). Toilet was also clean. The hotel was okay for us. Read the reviews at Ctrip.com in Mandarin Chinese: http://hotels.ctrip.com/hotel/777873.html

That’s our first day in Harbin. Below are our itinerary for the next 3 days in Harbin:

– Lunch at Robot Restaurant
– Go back to Beijing

Read more on 6 Things To Do in Harbin.

Train from Beijing to Harbin

6 Things To Do in Harbin