At that time, we almost took the economy train, but fortunately failed. Our economy train was K type of train. Read more about our story of The Struggle to go to Harbin, so then we went by high speed train one week after it.

Finally the day has to come. Our “second” departure time to Harbin. At 1 pm, we went from our university dorm to Beijing Railway Station by bus then continued by subway. I suggested to go by subway to the station, because afraid of the traffic jam. Beijing has bad traffic jam too. The train was scheduled to depart at 3.15pm. So then we arrived at Beijing Railway Station at around 2pm. We went inside the train at 3pm.

During our journey from Beijing to Harbin, we saw a lot of mountains or beautiful hills. Coupled with orange-colored sun. What a beautiful views! When the sky was getting dark, we couldn’t enjoy the view outside again. Four of us were just doing chit chat and selfies.

Inside this D-type train (Dongche 动车), there’s a hot water provided. So we can drink hot water, brewed tea or coffee. The train was clean and convenient. So do the toilet. Actually there’s a high speed train that provides bed as our seats. There’s also a train which has private rooms, one room for 4 people inside. But unfortunately we couldn’t get the train with that types. We only could get the D-type train, which means we had to sit for 7-8 hours from Beijing to Harbin. Well, it’s actually better than sit for 12-18 hours by using economy train.

The train was stopped at every station. When we almost arrived at Harbin around 9pm, it’s in Shenyang I guess, we already felt the cold from outside. At first we took off the jacket when we’re in the train, but when we felt the cold from the outside we immediately wear the jacket again. We’re so excited to go to Harbin, and experienced the cold weather in Harbin. 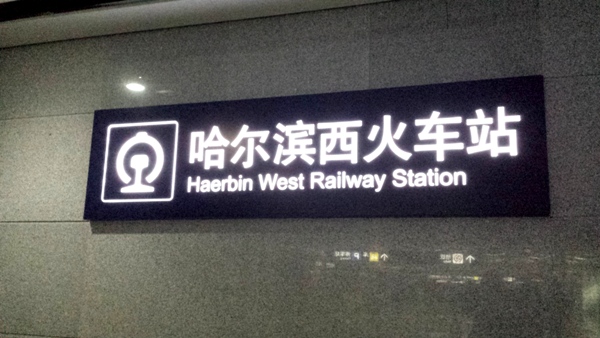 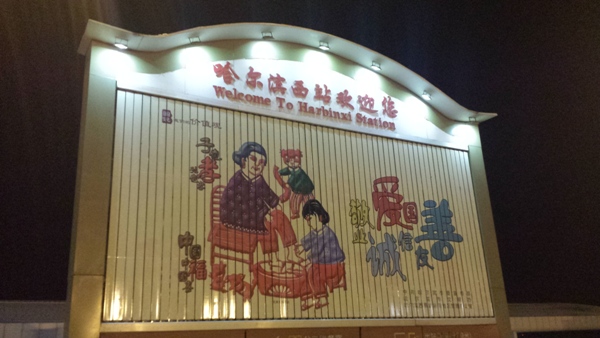 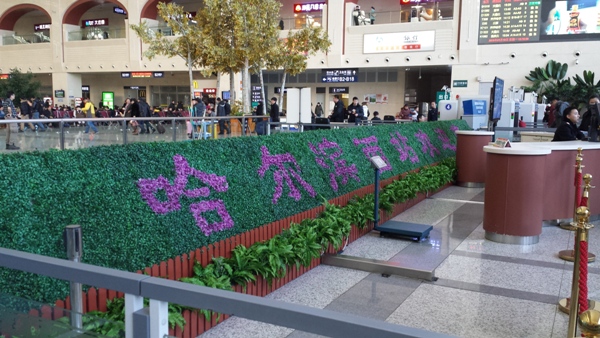 Finally around 11pm, we arrived at Harbin West Railway Station. When we went out from the train, we started to feel cold. But the cold was not as cold as I thought before. Maybe the weather at that day is not that cold. We’re so happy and excited because finally arrived in Harbin. Yeaa, Finally! 🙂