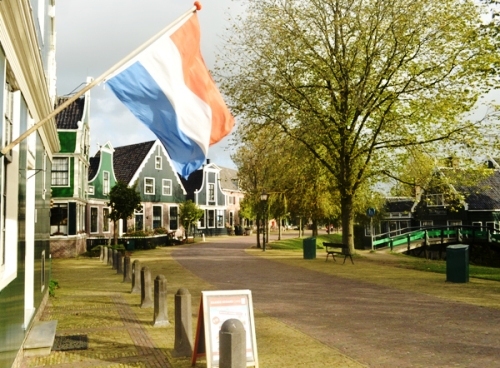 The capital of the Netherlands is a city surrounded by water, therefore most museums and tourist attractions here are more easily accessible via canals. There are also many people who use bicycles here. The interesting thing is that the bikers are more or less similar to motor bikers in Indonesia, really crazy. So if in Amsterdam you have to be careful with bicycles.

The usual thing to do in Amsterdam is to enjoy the city of Amsterdam by riding a canal, riding a bicycle, or walking. For those who like to go to museums, Amsterdam offers a lot of museums, such as the Rijksmuseum, Anne Frank House, Van Gogh Museum, and even there is also Sex Museum. Yes, Amsterdam is famous for its sex and drug free. I have seen in supermarkets in Amsterdam that there are chocolate, drinks, or snacks that the ingredients are mixed with Marijuana.

There is one tourist attraction that in my opinion is quite interesting in Amsterdam, Begijnhof. Begijnhof is a kind of old Dutch housing which is inhabited by Beguines, a Catholic woman who lives in a semi-monastic condition but does not take a religious oath. The most interesting houses are numbered 34, a beautiful wooden house that has existed since 1528.

Oh yeaa, when in Amsterdam you have to take a picture together with the “I amsterdam” slogan that you can find behind the Rijksmuseum.

Imagine the beauty of tulips in the Netherlands? That means you have to go to this place, Keukenhof. Keukenhof is a flower garden in the Netherlands and also one of the largest flower gardens in the world. Located in South Holland, between the cities of Hillegom and Lisse, south of Haarlem and southwest of Amsterdam. This park is only opened in the spring, from mid March to mid May. Here we can see the beautiful expanse of Dutch tulips. To enter this park there is an entrance fee of 14.5 Euros.

Giethroon is often referred to as “Venice of the North”. Yes, in Giethroon we seem to be in Venice because the city is surrounded by water. In contrast to Amsterdam, in the village of Giethroon we will not find any kind of motor vehicle. Here you can explore the village on foot through the 176 bridges, or you can also rent a bicycle, and the main thing is to take a boat down the canal.

In Giethoorn, we can walk down the canal and enjoy the beauty of the village, visit souvenir shops, visit museums, or relax in restaurants or cafes in the village. This village does not allow the hotel to stand because it is considered not in accordance with the philosophy of the village which is small and simple. Thus, a popular form of lodging is a guest house with a bed and breakfast concept.

If you don’t have enough time to go to Kinderdijk, another alternative to enjoying the Dutch Windmills is to visit Zaanse Schans. Because the location more easily accessible from Amsterdam, which is about 30 minutes from Amsterdam. Although both are windmill villages, Zaanse Schans has a different atmosphere from Kinderdijk. If Kinderdijk is pure only for windmills, in Zaanse Schans we can find factories / cheese shops, Dutch wooden shoes (clogs), etc.

Zaanse Schans is a picture of Dutch life in the 18th and 19th centuries. Housing to its windmills is still sustainable today. In the golden era of the Netherlands, this place was one of the industrial centers in the Netherlands.

Located in the province of North Holland, or north of Amsterdam, there are 3 interesting villages to visit namely Edam, Marken, and Volendam. These three villages are located not far from Amsterdam, so they can be visited in 1 day.

Edam is famous for its cheese, which is Edam cheese. In the Middle Ages, the cheese market in Edam was a center of community activity, where farmers brought their made cheese to be weighed, sold and then exported throughout the world.

2 Days 2 Nights in the Netherlands

Day 1 in the Netherlands: Amsterdam