Here there are a lot of fresh seafood, fruits, and local snacks such as takoyaki, yakitori, okonomiyaki, etc. The first snack I tasted was Mochi Strawberry Daifuku. This is mochi, which has a whole strawberry in it. The taste also varies, there are chocolate, custard, Mashed Sweet Red Bean Paste, and Smooth Sweet Red Bean Paste. The price is 300 yen (or around Rp. 39,000). Oh yeah, mochi like this is also sold in the form of its packaging, so you can take it home for souvenirs.

I also saw a peach that seemed very interesting to try. Peaches are also famous in Japan. Therefore, the price is also expensive around 1000-2000 yen (or around Rp130,000 – Rp260,000) per 1 piece. Very expensive right? Because my friend didn’t want to buy peaches, I also didn’t want to buy it because of expensive.

Here we also reunited with my friend of Japanese friends. We went together to the Sushi restaurant in Kuromon Market. It turns out that this restaurant is managed by Chinese who already live in Japan. We ordered several kinds of sushi. But as soon as I tried it, I didn’t really suitable the sushi that was sold in this restaurant. I don’t really like it.

Next we bought takoyaki and okonomiyaki. Well, if these 2 foods that I tried were really good! The price of takoyaki for one portion is 500 yen (or about Rp. 65,000). For okonomiyaki the price per one portion is 800 yen (or around Rp.104,000). Thinking about converting to rupiah is expensive too. But it’s indeed delicious. 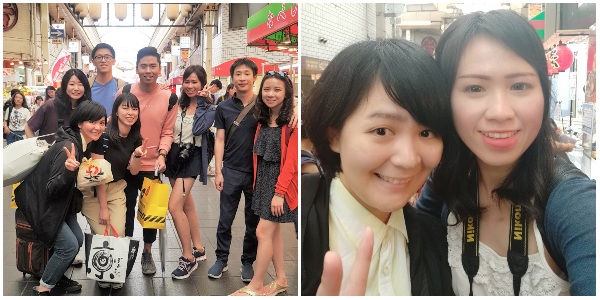 Osaka Castle was a royal palace of Japan in the early 16th century. Osaka Castle is now a modern museum that tells the journey of Toyotomi Hideyoshi, the founder of the palace who was a ruler in the Osaka area. If you go up to the top floor, you can enjoy the view of Osaka from a height. But if you want to enter Osaka Castle, you have to pay 600 yen (about Rp. 78,000) for adults and free for children.

We arrived at Osaka Castle around 12:40. Because we want to save while in Japan, so we do not enter into the Osaka Castle. We were just relaxing and taking pictures in the Osaka Castle complex area. If only in the complex area it’s free. Here you can also try wearing Japanese-style war suits, and it’s free! So the rule is, they will take photos of us wearing war clothes with their cameras. They will also take photos with our camera. If we like the photos using their cameras, we have to pay.

But because my friends were not interested, we only saw other tourists who wore the Japanese-style war suits. We are here sitting relaxed enjoying the atmosphere until around 14.15. After that we continued our journey to Dotonbori and Shinsaibashi for shopping, especially shopping for PO needs. 😀

We arrived at Dotonbori around 15:15. At that time we immediately looked for the items we needed. Tips for those who want to shop, if you want cheap shopping at Don Quijote. Don Quijote (Donki) is the biggest discount store in Japan that is open 24 hours. The selling price is cheap, plus they like to give more vouchers. So it can be even cheaper to spend. 😀

But finally I was able to use my Don Quijote voucher because the purchases reached more than 10,000 yen. I also got a 500 yen discount. Not bad 😀