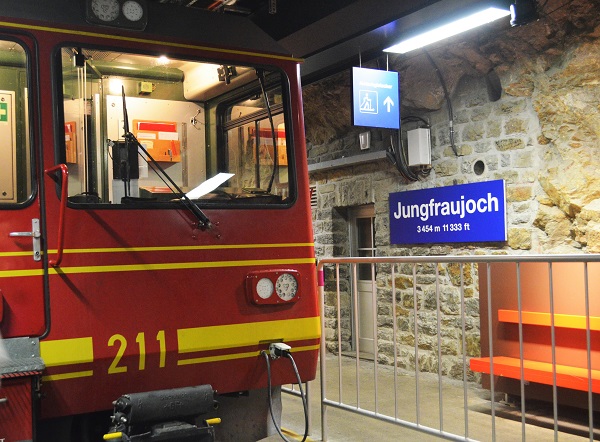 Before leaving from the hotel, we had breakfast first which was already provided from the hotel. Most of the hotels in Interlaken Switzerland have includes breakfast. After propping our stomachs, we were ready to go up to one of the mountains of the Swiss Alps, Jungfraujoch. We were ready for “a war” with cold, wearing thick jackets, thick gloves, skullcaps, and other winter gear. Because I heard on top of Jungfraujoch, the average temperature is -10 degrees Celsius. I also did not forget to bring Jungfraujoch return train tickets that had been purchased the previous day, and “Jungfrau Railway Passport” which was given when buying tickets to be stamped on Jungfraujoch.

Right at 08.00 am our train arrived at Interlaken West. Here is our route from Interlaken West to Jungfraujoch, with a total duration of about 2 hours:

It should have been 2 hours to get to Jungfraujoch from Interlaken West, but when we were at Kleine Scheidegg, we actually missed the train 2 times because the train was full all the time. So it takes quite a long time, around half an hour we were waiting for the train. This is because we did not reserve a seat before. When buying a train ticket, we were also asked by the clerk, whether we want to book a seat or not, but we need to pay again. Because we thought we could get a seat, we finally declined the offer. Uh it turns out the reality, a lot of tourists have booked seats.

When at Kleine Scheidegg there was a special queue for those who had reserved seats. The queue is only a little, while the queue was very long for has not reserved a seat. Therefore, we missed the train twice. Finally on the third train, all seven of us got in all. But still have to stand up. Imagine, ride the highest train in Europe with a decent slope, and pass through 3 mountains at once namely Eiger, Mönch, Jungfrau. It feels like riding a roller coaster that is going up, but this is the standing position. Yes, you can imagine how it feels :))) Now this is a tip for those of you who want to go to Jungfraujoch: have to book a seat in advance.

This train passes through several stations, such as Eigergletscher Station, Eigerwand Station and Eismeer Station. At the second and third stations, the train stops for 10 minutes. During these 10 minutes visitors are welcome to get off the train and enjoy the view provided at the viewpoint.

Finally around 11:30 am, we arrived at Jungfraujoch. I was immediately feeling excited. Can’t wait to explore every corner on this Swiss mountain with a height of 3,454m. But because I was with a parent whose physical condition was not very good, I also had to be patient and walk along with the parents’ rhythm. When I’m too eager to walk here and there, my mom always says “Wait, rest a minute.” Yes, my dad feels dizzy. It was the first time in their lives that they were at such heights, especially with their 60s and above, naturally feeling dizzy.

The “Jungfraujoch” tour starts with “Jungfrau Panorama” which features a 360° cinematic experience for 4 minutes. We just passed by, and continued on to “Sphinx Terrace”. We took the fastest elevator in Switzerland that took us to the Sphinx Observatory in just 27 seconds. Here we can enjoy the beauty of Aletsch Glacier. Well I did not expect the weather to be very sunny and even I felt the heat wearing a jacket and thick gloves. It turns out that Jungfraujoch is not as cold as I imagined. 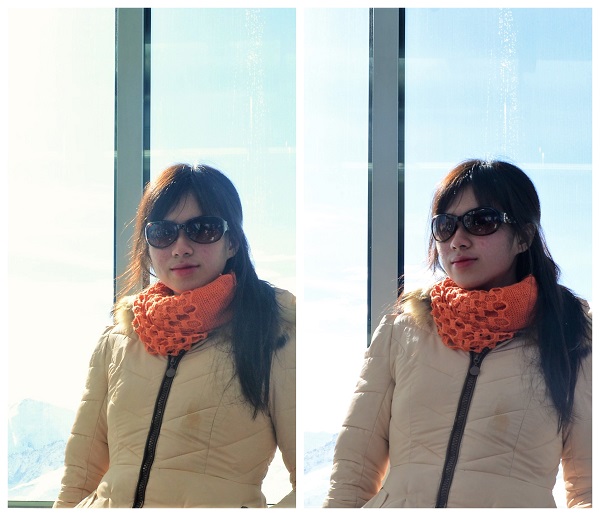 After that, we got off the elevator again and were faced with two tour choices, such as Snow Fun or Alpine Sensation. At first we chose Snow Fun and it turned out that it took us out of the room. Yes, Snow Fun turns out to be playing in the snow and winter games like Zip Line, Skiing & Snowboarding, and there is also Sledge Park. Exciting indeed, but parents do not dare to come out, because it turns out it’s really cold! Finally, we only took photos in front of the exit, and at least parents already felt how the snow is and stand on the snow :))) 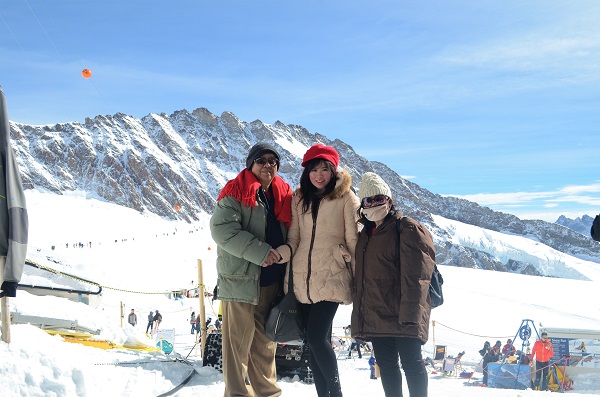 Then we continued to the Alpine Sensation. Here we can see how tourism in the Jungfrau Region from ancient times to the present time, depicted in the form of images, music, light, and there is also a cold air. We can also see how Jungfraujoch was originally built, Jungfraujoch tunnel workers who died while on duty, and so on.

After the Alpine Sensation, we continued on to the “Ice Palace”. So here we are walking on ice, like on an ice skate ring, but it’s not slippery here. In addition, we can see ice sculptures formed into various things, similar to the Ice Festival in Harbin.

Next we passed the “Lindt Swiss Chocolate Heaven” chocolate shop and bought some Lindt chocolates here. It is rather expensive, but when else shopping at Lindt Chocolate Shop is the highest in the world? 😉

Because my parents also had a history of illness, I also became worried and actually was anxious while I was in Jungfraujoch. We also could not stay long there. In my heart, I really want to still be in Jungfraujoch to enjoy the beautiful views of the Swiss Alps. But on the other hand, I am also worried that my dizzy condition will not get better. Plus I haven’t had lunch either. Finally, after 2 hours of stroll around Jungfraujoch, we immediately went down again.

Well, there was an incident when we got off the train from Jungfraujoch to Kleine Scheidegg. We forgot where we put the train ticket! Train tickets in Switzerland sometimes like being checked by its officers, sometimes not. The train ticket from Jungfraujoch was checked, and by chance we forgot where we put it too. Another coincidence, the officer was very mean, she said we had to pay for train tickets again as soon as Kleine Scheidegg, which means we lost 13 million and had to pay 13 million more! Because she said I could lie, I could just buy a one way ticket to Jungfraujoch, not a return ticket.

Everyone in the train immediately noticed us. Then, there was a Taiwanese who was kind enough to give me a seat. I returned slowly looking for the missing ticket. Finally I found the seven tickets, and that’s when everyone applauded! Big thanks to that Taiwanese people 🙂

Maybe because I stood with the slope of the train and was accompanied by panic, it was rather difficult to find the ticket. The mean officer didn’t know where she was. But there are other officers who have been waiting for us when getting off the train, it looks like the mean officer told the other officers to collect our train tickets. Fortunately, because we have found it, we were able to calmly get off the train. Because of this incident, we call the ticket to Jungfraujoch as “Tickets of Happiness”, LOL: D

The time had shown around 14.00 when we arrived at Kleine Scheidegg. We immediately looked for a nearby restaurant for lunch. Even my dad still feels dizzy, but it’s better. After finishing our lunch, we continued our journey to Lauterbrunnen.

Lauterbrunnen is one of the most beautiful villages in Switzerland with a height of 802 m. There are many waterfalls in this village, but the most famous are Staubbach and Trummelbach Falls. Initially when searching for lodging in Switzerland, I searched around this Lauterbrunnen. But because parents are afraid of the cold because they are in a mountain valley, we ended up staying in Interlaken.

At Lauterbrunnen we just walked leisurely enjoying the village to the front of Staubach Falls. After take photo in front of Staubach Falls, the journey continues to the next beautiful village, Mürren. This is the village that is said to be the most beautiful, more beautiful than Lauterbrunnen, because the distance is also closer to Jungfraujoch. So from Lauterbrunnen, we took the cable car, then took another small train to Mürren. According to Rick Steves too, if you want to stay in the Bernese Oberland area, it is better to stay in this Mürren. The journey to Mürren is indeed far because it is on the mountain, but the view is indeed great.

Mürren is a village with a height of 1,638 m that is free of vehicles and pollution. In Lauterbrunnen, we can still find cars. In Mürren there are no vehicles allowed, so the air is also very clean here. The time showed at 17:00 when we arrived at Mürren. Once out of the Mürren station, I immediately fell in love with this village. What a breathtaking views! Because it was late afternoon, we only spent 30 minutes in front of the station exit. Parents are too tired to walk around the village. If I walk alone, I’m afraid that I will split up, so I just enjoy the village from the front of the station. From here too, the view is amazingly beautiful. 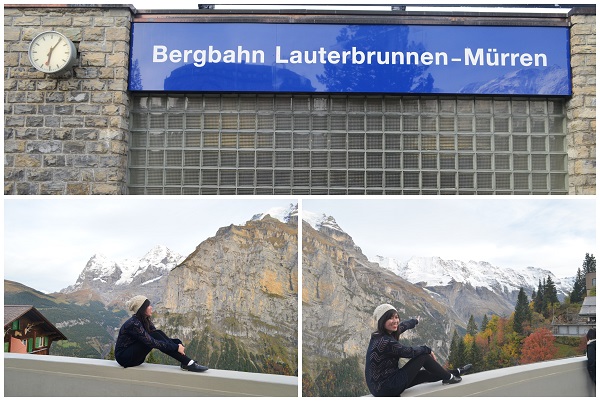 Because it was already at 17:30, we immediately go down again to Lauterbrunnen. Sad to leave Mürren honestly 🙁 I really want to linger in this beautiful village, enjoying 3 Alps at the same time accompanied by colorful autumn leaves.

After that we saw a Swiss watch shop “Swatch” that was still open, we finally went there and bought a watch for my cousin. Incidentally at that time there was a promo, Buy 1 Get 1 Free. The free one is taken randomly, incidentally it’s a watch for girls. Finally I use it, pretty much a free watch 😀

The time has shown at 22.00, we went straight back to the hotel to rest. That night was our last night in Switzerland. The next day at 7 am we were out of the hotel.

Switzerland is indeed the most beautiful country I have ever visited, but also the most expensive country. Traveling in Switzerland feels like a walk in a fairy tale village. And I will never forget my epic journey with this family to Switzerland, especially the trip to Jungfraujoch 😀

2 Days 2 Nights in the Netherlands