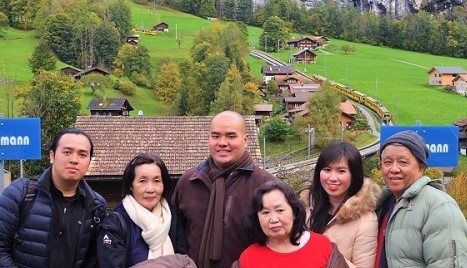 Exactly one year ago, my family and I traveled to Western Europe, such as France, the Netherlands and Switzerland. We planned this vacation 1 year before. Because traveling with family, where there are 3 parents, I also planned a vacation to Europe very carefully and detailed. We have a total of 5 people from Indonesia: me, mama, papa, aunt, and younger cousins. There were 2 more people who took us for a walk while in Europe: cousin and his friend. So in total there are 7 people.

I made a detailed itinerary accompanied by transportation from one place to another. Besides that, I also made detailed budgeting. The cost of a vacation to Europe is usually very expensive, but I managed to keep the costs down on plane costs. At that time I got a cheap airplane ticket to Europe, which was only 6 million Rupiah Return Ticket.

For those of you who are curious about how I designed the details of the itinerary to Europe with my family and its budgeting, I will give the leak below.

Travel Itinerary above is a general itinerary. Below I have divided the itinerary on each country.

Here are our expenses for 10 days in Europe for a total of 12 days (2 days in the airplane). I have divided into parts.

It can be seen from the budgeting above that the total expenditure per person is Rp. 24,722,657. Yes, it’s around 25 million, because there must be some expenses that I forgot to note too.

Many don’t believe I spent only 25 million traveling to Europe for 10 days. There are many ways that I did to reduce the budget for a trip to Europe, for example mutually changing flight routes or travel schedules, looking for cheap flights to Europe, etc. Because we stayed 5 days at Plum Village, a Zen Buddhism meditation center in France, so we could also save on the hotel expenses as well.

Yes, you should pay for the stay at Plum Village too, but because my cousin is currently studying there (read: monk), we were given free for the cost of lodging. We even got a special invitation letter from Plum Village, so that when applying for the visa it was easier to approve 🙂

For me, this trip to Europe with my family was very meaningful. Because we are not just ordinary walks, but there is also a spiritual journey. “Journey to the West” might be a suitable title for our trip to Europe. When we all “go home” in France. The purpose of “returning home” is because Plum Village can be considered a holy land. In fact, it is already part of our family too.

It feels very grateful that I can bring both parents “home” to Plum Village, have a good karma with the extended family of Plum Village, and can also take them for a walk in Europe, especially Switzerland.

Yes, that’s the itinerary, budgeting, and a little story about what I felt behind our trip to Europe. Hopefully this itinerary and budgeting is useful for those of you who are arranging a vacation to Europe with parents 😉