Belitung has so many small islands which can be visited by us, such as Bird Island, Sand Island, Lengkuas Island, Kepayang Island/Babi (Pig) Island, Batu Berlayar Island, and Kelayang Island. To get into those islands, the starting point is at Tanjung Kelayang Beach. From Tanjung Kelayang Beach, we can rent a boat for a day to do island hopping. When we contacted the local tour in Belitung, we said we wanted to rent the car, driver, as well as the boat. So, we didn’t need to rent the boat separately. We rented the boat Rp500.000/boat/day. The time was flexible. We can arrange the time by ourselves. At that time, we started at 10am and finished at 3pm. We can do island hopping until 4pm, but because of raining, so at 3pm we had finished the island hopping.

Our journey was started from the hotel around 8.45am, then we thought we’ll had lunch inside the boat, so we bought the meal for our lunch. We bought rice boxes at the small Chinese restaurant. Around 1 hour journey, 09.50am, we arrived at Tanjung Kelayang Beach, the starting point of island hopping.

At Tanjung Kelayang Beach, there’s a toilet, so if you want to change your clothes, you can do it here. But because we’ll have some “photo session” so it’s better to change it later, when in Lengkuas Island. We can also change our clothes at Lengkuas Island since there’s a toilet too. Our driver, Mr. Wawan, was not joining us to do island hopping. He waited for us at Tanjung Kelayang Beach. While we’re gonna do the island hopping with our boat’s crews. 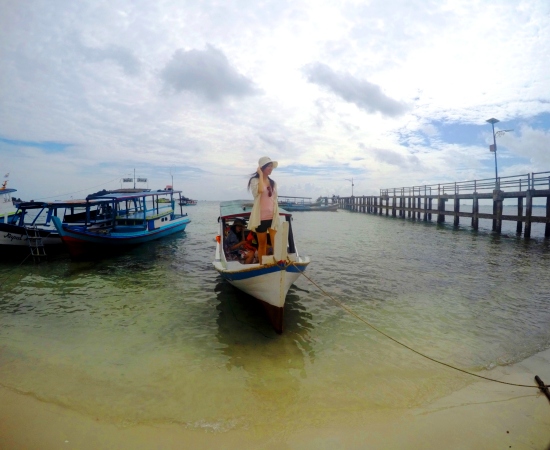 We’re going to the next island, Lengkuas Island. When we arrived at Lengkuas Island, we had photo sessions here 😀 So many big granite rocks here, such a photogenic spot huh. When we took pictures, it’s suddenly raining! At first, it’s full of people, but because of raining, we’re the only one who did the photo sessions. So, the result was really good. It’s like the beach was less of people, but actually it’s full of people. LOL. There’s also an “Angel’s Pond” at Lengkuas Island. It’s a part of the beach surrounded by granite rocks. Unfortunately when we’re there, the Pond was receding. So we couldn’t swim at the “Angel’s Pond”.

There’s a lighthouse at Lengkuas Island, which has 18th floor and built by the Dutch in 1882. It still maintains its main function today in guiding ships sailing through and out of the island of Belitung. Approximately 50 meters in height, it is as tall as a 12-storey building. We heard that we can go inside the lighthouse, so we can get a complete 360 degree view of the fascinating Island. But unfortunately when we’re there, it’s closed to public already, since a month ago. It’s because there are so many “Extortion” to go inside the lighthouse. So, it’s closed to public for a while. Dunno when it’ll be open again to the public.

After we took pictures, we went to the toilet to change our clothes. After changing clothes and preparing to do snorkeling, then the rain stopped. It’s our luck to do snorkeling in a bright weather 😀

After snorkeling at Lengkuas Island for about 1 hour 15 minutes, then we went to Kepayang/Babi Island to do snorkel. Kepayang Island is also called as Babi (Pig) Island. It is said there was a Pig Farm here, but some people said it’s because there’s a giant granite rock which look like a Pig. Dunno which one is true, but the point is it’s called Babi Island now. Babi Island consists of two islands, Babi Besar (Big Pig) Island and Babi Kecil (Small Pig) Island. Because the location is really near to each other, we can take a walk from Babi Kecil Island to Babi Besar Island. There’s a restaurant at Kepayang Island, it is said to be the only one restaurant in the small islands in Belitung. So, if you didn’t brought the packed meal, you can have lunch at Kepayang Island. 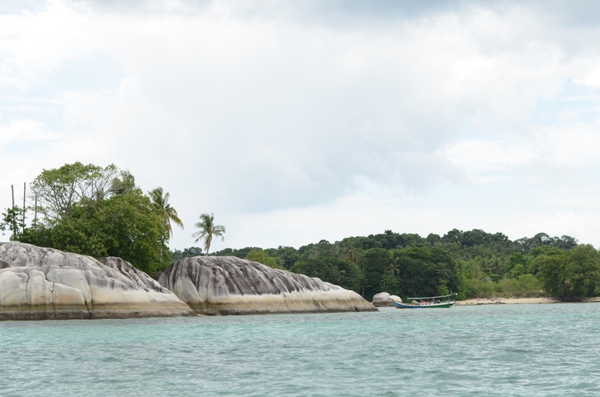 Then we only visited Babi Besar Island to take the pictures and enjoy the scenery. So many giant granite rocks here. It’s different with the granite rocks in Lengkuas Island. It’s bigger than in Lengkuas Island. So, at that time I climbed into the highest rock here, and the scenery was really nice. So, it’s a sea below us. There’s a small forest too here. Such a beautiful scenery, isn’t it? 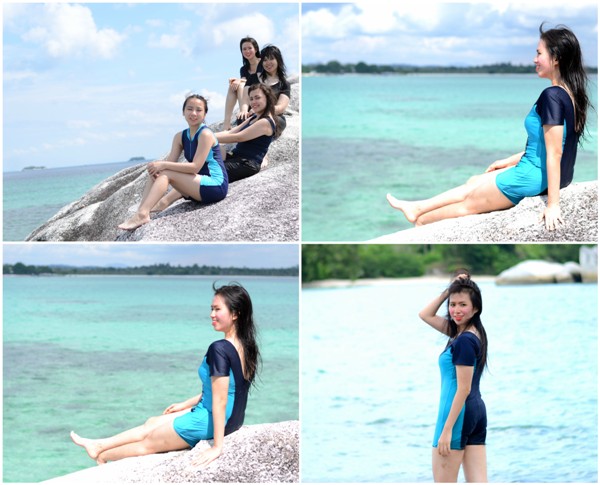 It was 3pm already when we arrived at Tanjung Kelayang Beach. At that time, we hadn’t have lunch because we’re just too excited having fun at the beaches and snorkeling, so then we forgot to have lunch. Finally we had lunch when we’re arrived at the hotel.

Anyway, we also rented Gopro for a day, because none of us brought the underwater/action camera. So we rented it from our local tour, and it costs Rp100.000/day. Because we’re 4 persons, so it costs Rp25.000/day/person.

Catching the Sunset in Belitung