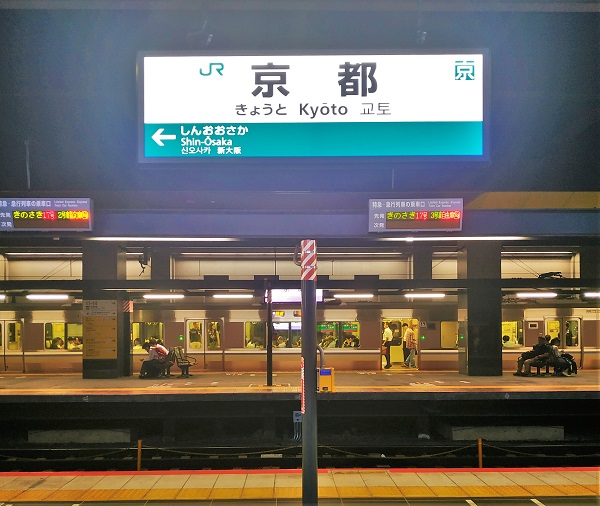 From Osaka to Kyoto

On this first day we arrived at Kansai International Airport (Osaka) around 16.10. Then from Kansai International Airport we immediately took the JR Haruka Airport Express train to Kyoto. The trip takes about 75 minutes. Arriving at Kyoto station it was around 18.35. It turned out we were welcomed by the rain when we arrived in Kyoto. The rain was not too heavy, but it still made us troublesome because while we groped our luggage to the meeting point location with our airbnb.

Airbnb has 2 floors. Luckily our room was on the first floor, so there was no need to be tired up stairs. After that we showered, rested, and finally came out of the air at 20:30. At that time we immediately looked for dinner. Because we already list what foods we want to taste in Kyoto, we also look for restaurants on our list that are located closest to our current position.

Incidentally there is Ichiran Ramen which is located not far from our airbnb. Ichiran Ramen is indeed very famous in Japan. But unfortunately this is not halal. Even though I’m not Muslim, I don’t eat pork either. Food in Japan is mostly non-halal. If there is pork, I usually give it to my friends.

Arriving at Ichiran Ramen 20.37, we were initially confused because once there was a machine to order food. Yes, so if in Ichiran Ramen, the food order is self-service. Luckily there is only Ramen here, not using meat. I also chose that one, and I added Half-Boiled Egg. The price of the ramen itself is 890 yen, and the egg is 130 yen. So my total dinner was 1020 yen (or around Rp134,640). For my other friends on the Ichiran Set Menu 5. This set menu is complete with meat and half-boiled egg as well. The price is 1490 yen (or around Rp. 196,680).

Next we have to fill in the Order Sheet provided in the front as well. So in the Order Sheet paper, we have to write our ramen preferences, whether the broth level is strong or not, what spicy level, how much garlic, and so on. While filling, while waiting in line. Because the queue is quite long. Not to mention waiting in line his seat. So here the seat is not too much.

Finally, at around 21.19 we just entered a room with 5 tables, and each of them had a partition. Because we are five, so this is really right for us. The unique thing here is the presentation of the food. So as soon as we sat down, in front of us there was a curtain that connected us to the waiter who served our food. If the curtain is opened, the servant who has no visible face will serve us food.

Initially he gave an egg which had to be peeled off by its skin, with a bowl and chopsticks. Water is available at each table. We just fill it in the glass, and it’s free. Restaurants in Japan usually do give water for free. After that, not long after the waiter opened the curtain again and he served ramen for me.

After serving ramen, he said something in Japanese, which is probably “Happy eating” this time. What surprised me the most was the waiter then turned to his left and bowed about 90 degrees, while also saying something that I did not know what it meant. For me this is a unique and interesting experience that I encountered in Japan.

This ramen turned out to be a very large portion. After tasting, this ramen is really good! Even though I only eat ramen with 1 half-cooked egg and green onion, it’s really delicious. It’s reasonable enough, the price is expensive. Delicious and also a lot of portions. The sauce is just right, the spicy level is also right for me, just delicious. Very recommended 😉

When we were all done eating, initially we wanted to go for a night out around there. Uh, but unfortunately it rained again and it was really heavy. We tried to wait a while until the rain stopped, but the rain even more heavy. Then we thought that instead of waiting for the rain to stop, who didn’t know how long this would be, we would just try to walk. We also found a supermarket, and finally stayed there a while.

After that we went out again to look for a restaurant. On our food list there are several restaurants close to where we were at the time. But most are already closed at night. Fortunately there is one that is still open, namely Chao Chao Gyoza. Actually we are still full from eating Ichiran Ramen, we just thought Gyoza was small, so it still okay. 😛

It so happened that the location of Chao Chao Gyoza was indeed in the same direction as our way back to Airbnb. Arriving at Chao Chao Gyoza around 22.40. It turns out that the place is really small, and here there are also many tourists. The gyoza also turns out to be just so-so, not too tasty. If the Shrimp Gyoza costs 480 yen (or around Rp.63,360), it contains 5.

Around 23.30 we went back to Airbnb by foot. Turns out we passed a red light district street in Kyoto, in the Kiyamachi area. Yes, Gion is indeed the red light district in Kyoto. But our airbnb still has to go into small alleys. It turned out like this after all the night life in Kyoto. Even though it’s raining, it’s still very crowded. Lots of bars and pubs on the side of the road. There is also a river that crosses along this road, the Kamo River. Around 00.30 we finally arrived at our airbnb.