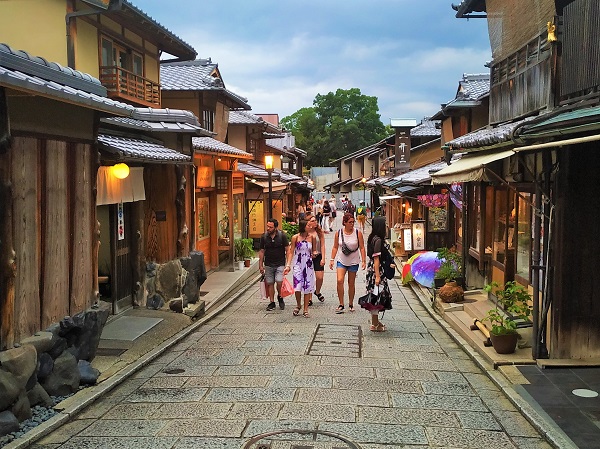 From Gion to Fushimi Inari Taisha

The second day starts around 08.00 local time. While on the way to the train station, still in the Gion area, we saw an alley with very typical Japanese houses. Finally we decided to take photos for a while in front of typical Japanese houses. After that we will walk again to Gion-Shijo Station to Fushimi Inari Taisha. From Gion-Shijo Station to Fushimi Inari, all we have to do is take the Keihan Main Line Semi-Express train, with a duration of about 9 minutes.

Around 08.55 we arrived at Fushimi Inari Taisha. Fushimi Inari Taisha is a Shinto shrine which is the central temple for around 40,000 Inari shrines that glorify Inari (the God of Rice). There is no entry fee to this Fushimi Inari. The interesting thing to do here is to pass around 10,000 Torii (gates) using Kimono / Yukata. At first I also wanted to rent a kimono / yukata like that before coming here, but since my friend wasn’t interested in all, my plan was finally canceled.

After taking photos and walking for about an hour, we continued walking again. Our next destination is to go to Nishiki Market. Once out of Fushimi Inari heading to the train station, I saw a shop selling Japanese Matcha Soft Ice Cream. I was immediately interested to buy it. The price is 400 yen (or around Rp52,800). Pretty expensive for ice cream. But since it’s already in Japan, it doesn’t matter what the price is, if you want, just buy it 😀 It tastes really good. Must try when in Japan. 😉

After that, we stopped by the supermarket first. Because we at that time opened PO Japan, so we spent quite a long time in that supermarket. I checked the price is cheap too. After shopping for PO items, we headed straight to Nishiki Market.

Arriving at Nishiki Market, it’s around 15:30. On this 400 meter long street we can find various kinds of food and snacks typical of Kyoto. The first snack I found was Melon Pan, a melon bread filled with ice cream in the middle. Yes, Melon Pan is one of the famous snacks in Japan. In this shop, it turns out that there is also Cremia Ice Cream. It’s the most delicious ice cream that must be tried in Japan.

Next, we went around this Nishiki Market again. Like the market in general, there are selling vegetables, meat, seafood, etc. We also tasted Takoyaki here. We were going to eat ramen at Gogyo Ramen, which is in Nishiki Market. Many said it is a tasty ramen. But it only opens again at 5 pm. While that time showed pk16.30. There are still 30 minutes left.

Instead of us sitting quietly waiting for 30 minutes, my friend said it’s better to go somewhere else first and then go back again. But I don’t think it’s possible to go back to Nishiki Market, because the next destination is quite far from Nishiki Market. The next destination is to go to Starbucks in Ninenzaka, Higashiyama. Why want to go to Starbucks to be specific there? Yes, because Starbucks is very famous for its Japanese-style buildings, and is also the first Starbucks in the world to have a tatami room.

Either my friend got the map wrong or what, she said that from Nishiki Market to Starbucks Ninenzaka it was close, it could be reached on foot. At that time, I also checked on maps, and it looked far, it would be better to just take the bus. But because the most votes followed my friend, we finally walked. Not long after coming from Nishiki Market, it rained suddenly. We walked for about 30-40 minutes.

As soon as I entered the Higashiyama area, I was immediately stunned because this was a very traditional Japanese atmosphere. I also see that there are many people who use yukata. This Higashiyama area is my favorite in Kyoto. In Seoul, this is similar to Bukchon Hanok Village. Higashiyama is arguably the icon of Kyoto.

Starbucks, which is our destination, is still on top. Finally, at around 17:20 we arrived at Starbucks Ninenzaka. Arriving there the atmosphere is not really good, because my friend was so tired of walking, so we all had bad mood. This kind of atmosphere is the most uncomfortable when traveling. We should be happy, but at that time it was a bad mood 🙁

After resting for about 1 hour, finally around 18.20 we continued walking again. This time it was because our friend was in a bad mood, so we just went where the foot went. To be honest, I’m still not willing to leave the Higashiyama area. Still want to explore this area.

We walked straight and continued to follow the direction of walking foot. Eh suddenly we found a temple called Yasaka Shrine. This temple is indeed one of our destinations in Kyoto. Didn’t expect us to come here accidentally.

Kyoto is often called the city of a thousand temples. Some temples in Kyoto are even included in the UNESCO World Heritage Site, one of which is the Yasaka Shrine. Yasaka Shrine is located between Gion District and Higashiyama District, but is included in the Gion area.

Since we arrived at Yasaka Shrine, it was around 19:00 local time, the lanterns at the Yasaka Shrine were on. It’s beautiful to see so many lanterns burning. The traditional Japanese atmosphere is really great. We also take photos here in about 30 minutes.

Around 9:30 we started looking for places to eat nearby. We looked for a restaurant nearby Me, and found a Curry restaurant that had a good rating on TripAdvisor. That restaurant is called Mimikou 味 味香. The curry is pretty good. Looks like today we ate all in curry. LOL

After that, we went home by bus. Before returning to the inn, we stopped again at the supermarket that we visited yesterday. My friend is shopping for PO. I was only checking the price, how much it cost. Maybe later I will make a special article for my experience to open a PO yea? 😛