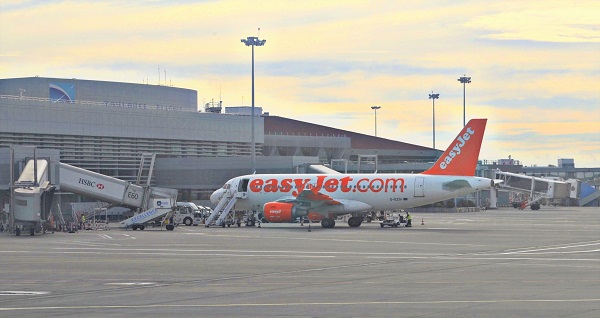 In Europe there are several low-cost flights that can be selected, but the most famous are EasyJet, RyanAir, and Vueling. EasyJet is based in London, UK. While RyanAir is based in Dublin, Ireland. And Vueling is based in Barcelona, ​​Spain.

When I designed the itinerary, from one country to another I chose to take a plane instead of a fast train. The consideration is that the plane ride is certainly faster than taking the train, with prices that are more or less similar (if you ride low cost airlines). Initially my flight plans were like this: Bordeaux – Amsterdam, Amsterdam – Zurich. From afar, I was looking for a plane ticket, and only EasyJet had direct flights with the route I wanted and the price was affordable. But I did not dare to buy the ticket first, because fear of being denied the visa. The plan was after the visa is out, I bought a ticket.

It’s low cost airlines, so the closer the D-day, the price will be more expensive. After the visa was issued, I panicked myself because ticket prices surged for Bordeaux-Amsterdam and Amsterdam-Zurich flights. As a result, I was immediately looking for a solution. I select the closest cities of Bordeaux, Amsterdam and Zurich. I am also “playing” the flight date, because the price is different for each date. After struggling for a few days, I finally found the flight route with the price that was still fairly okay.

So, my flight routes in Europe are Toulouse-Amsterdam and Amsterdam-Basel, all of which use EasyJet aircraft. Like low-cost airlines in general, there are many add-ons including luggage. One interesting thing that I found when booking this EasyJet flight ticket was the different number of passengers, the price is also different. In addition, for cabin bag there are only size provisions, Max. 56x45x25cm per passenger. Cabin bag does not have provisions for weight. So the weight is free, because usually the weight of the cabin bag is limited to 7kg.

At that time I booked the Toulouse-Amsterdam flight on October 1, 2017 for 7 people, and the total price was 476.62 Euros (or around Rp7,436,395) including 6 luggage with a total weight of 120kg. The flight time from Toulouse is 10:55 am, and at that time I arrived at Toulouse Airport at 10:30 am. It took about 25 minutes before the plane departed. At that time we all panicked, afraid to miss the plane. Coupled with the panic of EasyJet baggage drop counter staff who more or less said like this, “You have to go now to the boarding gate. Don’t be like this for the next time. You’re almost late! Run run run!” Her words are true, but that is the culture of the French whose tone of speech is somewhat not pleasant with the style of fast and rushed. Luckily when placing luggage, there was no problem with our baggage. So after putting the luggage, I and a Dutch friend immediately rushed to the boarding gate. While my parents and aunty were accompanied by cousins ​​behind, because parents can not walk fast right.

In the midst of a situation like this, eh it turns out there are problems. My aunt brought liquid chili in her bag, so that the chili that was brought from Indonesia had to be detained at Toulouse Airport. I also forgot to remind that in the bag that was carried into the plane (cabin bag) there should be no liquid objects (more than 100ml) or sharp objects. This incident prolonged the time up to the boarding gate. And when my Dutch friend and I arrived at the boarding gate, we immediately told the EasyJet officer at the boarding gate to wait for our group. At that time the actual time was showing around pk10.55. The plane was supposed to have run, but fortunately at that time either we were really waited by the plane or the plane was deliberately late leaving, for sure we were still hurried into the plane.

When first entered the EasyJet, my first impression was that this plane was very small. When take-off I felt nervous too. Understandably it is low-cost airlines. But we arrived safely in Amsterdam 🙂

Initially I wanted to fly a little afternoon, but it’s only left morning flight tickets. Now from the hotel in Amsterdam, the Golden Tulip Amsterdam West, we took a mini van for 7 people which had booked the day before at the hotel reception. Because we do not want to repeat the same incident as before, arrived at the Airport 25 minutes before departure. It was around 5 am, we had departed from the hotel to Amsterdam Airport Schiphol. Incidentally once that morning we were escorted away by the rain. So from the hotel lobby, we got a little bit rained on because the taxis were across the street. Moreover, we were also carrying luggage and carry-on bags from the Netherlands, that morning we were quite eager. Luckily we have already ordered a taxi in the hotel lobby, just imagine if we took public transportation (Take the Tram first to Sloterdjik Station, then take the train directly from Sloterdjik to Schiphol), it must be even more complicated. Moreover, we are a group of seven consisting of 3 parents.

The trip takes about 15-30 minutes. After arriving at Amsterdam Airport Schiphol, we immediately headed to the EasyJet counter for baggage drop. Well, here we were suspected by the officers because of 6 suitcases there were 3 or 4 suitcases that were more than 20kg. Then I used an excuse, the important thing is the total baggage of 120kg. Then the officer threatened me too, just if the total baggage was more than 120kg, they would give the bill to my credit card. I also said okay. I actually know that in total, it’s definitely more than 120kg, but fortunately I until now there are no more bills on my credit card 😛

When going into the plane, our cabin bags are checked one by one. It turns out (here I just found out) that the cabin bag must be 1, there should not be 2, with a maximum size of 56x45x25cm per passenger, no weight limit. Initially I thought there could be 2. In EasyJet, you can only carry 1 cabin bag. At that time I brought 1 bag and 1 tote bag which contained a lot of souvenirs from the Netherlands. Finally, I had to open the things in my carry-on bag, even because they didn’t fit, I put them into my family’s bag. After the bag becomes only 1 per person, this bag still needs to be checked of the size, if more than 56x45x25cm, the bag cannot be accepted into the plane. So there is a box to measure the size, if the bag can be put in a box, it means safe. I never thought that this aircraft was very strict against cabin rules.

After that, we got on the plane and flew to Basel, Switzerland on time. We arrived at Basel at 08.45 am. This EasyJet experience overall is less satisfying. But it is okay to save costs while in Europe. Because at that time we considered price and time, we decided to ride this EasyJet. But next time, maybe we’ll try other airlines or take a train.

Day 1 in the Netherlands: Amsterdam