October 17th, 2016. This ninth day was our last day in Korea. On the next day, we would left from our guesthouse to the airport at 12pm, so no time to go around Seoul again on the next day 🙁

Finally we arrived at Yeouido Hangang Park at around 12.30pm. It was a sunny day. This park was really beautiful but I wondered why it’s so quiet, not so many people. Then we asked the local people who just passed by us, then they said it’s Yeouido Hangang Park. But if we want to see the Han River, we needed to go down first. And finally from the distance, we saw Han River. Before reach the riverside, we wanted to take a relax. So there’re some “exercise equipment”, usually used by Ahjumma or Ahjussi. Then we also joined the exercises. At that time, the wind was blowing, added the atmosphere of relaxation. It’s enjoyable to take a relax and enjoy the city of Seoul, after the previous days we did really tiring journey. Maybe around 20 minutes we took a relax here.

Then we took a walk until Han riverside. We walked along the Han riverside, so on my left side it’s Han River, and on my right side it’s the park (Yeouido Hangang Park). There’re a lot of people who ride bicycle, but since I couldn’t ride bicycle, so it’s better to take a walk. There’re also so many Photo Zone spot here. This park is so spacious and beautiful. I really wanted to stroll around here longer. Moreover, the weather was really good, a sunny day but there’s also a blowing wind. I think I can spend 1 day stroll around here, but it’s impossible at that time. We also saw some people were doing shooting movie here. Didn’t know what Korean movie/drama is that. 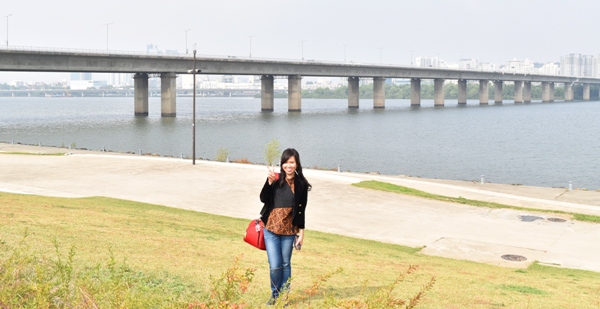 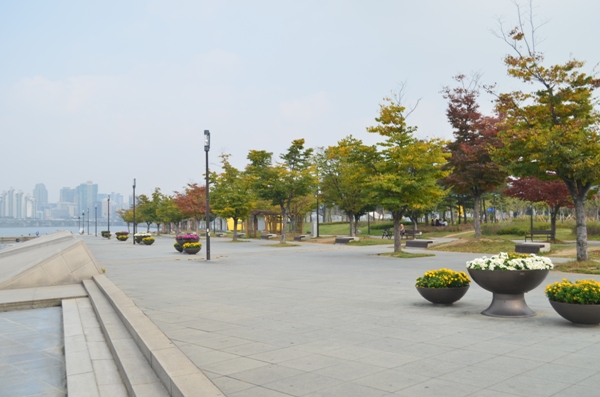 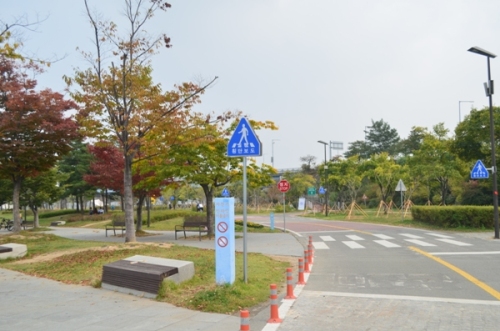 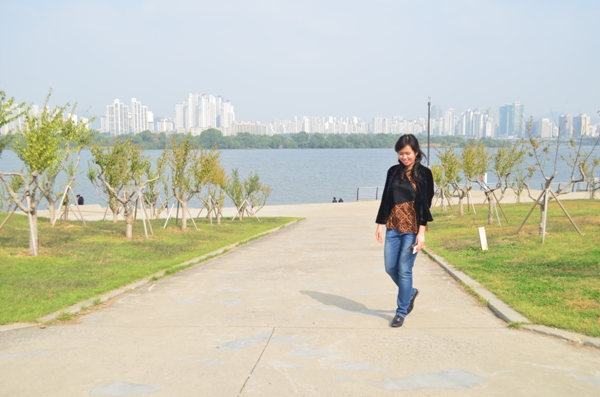 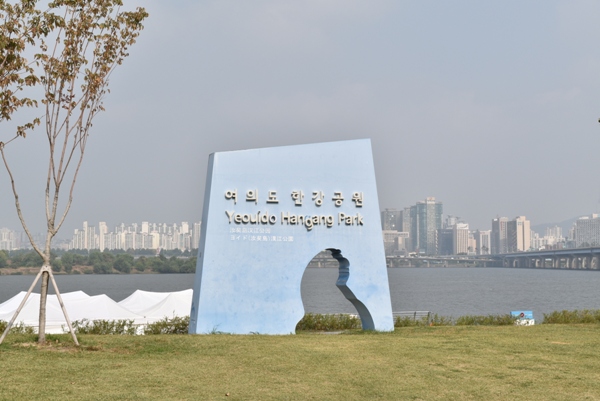 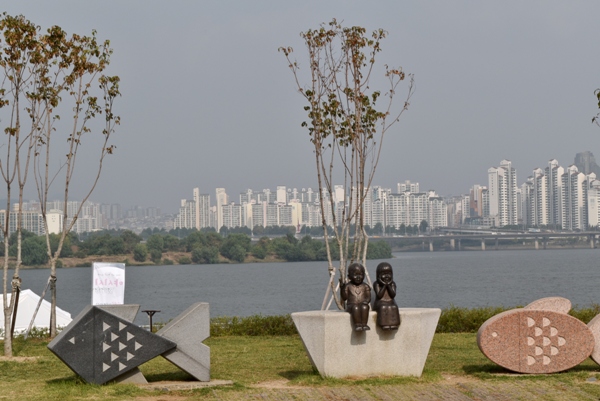 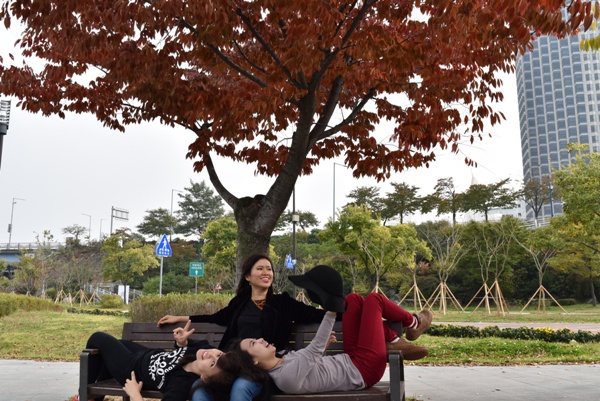 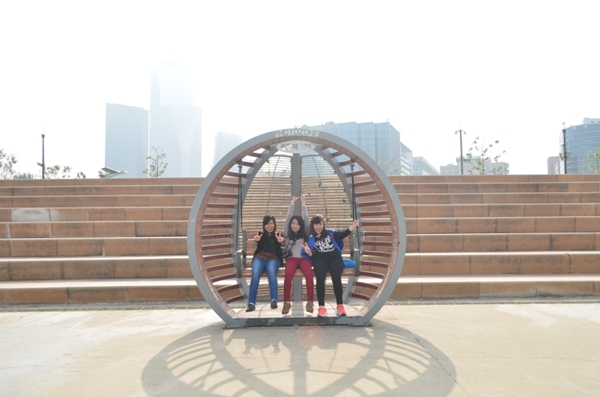 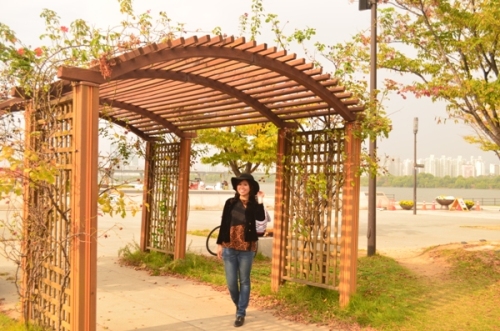 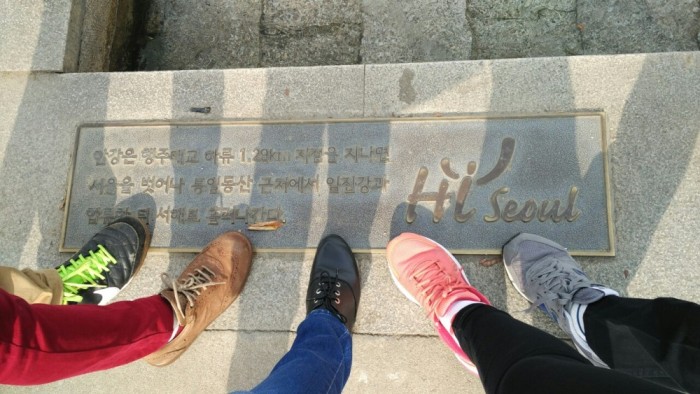 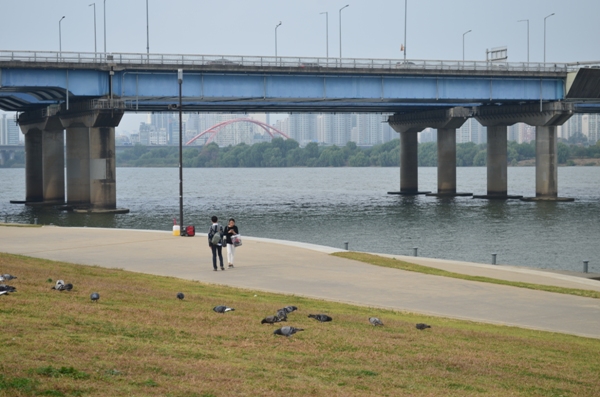 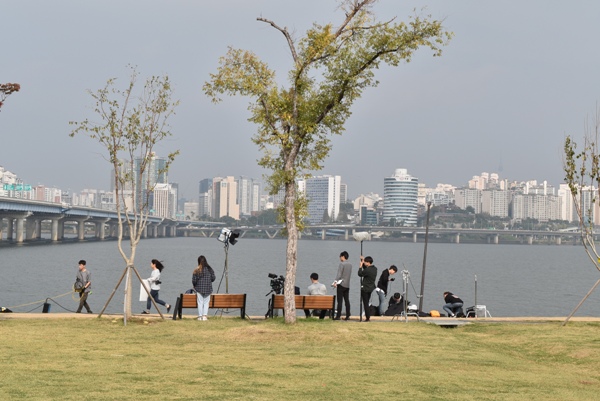 In the end of the road, we saw the iconic “I Seoul U“. “I Seoul U” is the new brand of Seoul, which means “Between people, there is Seoul”. The explanation would be, “Between “you” and “I,” among citizens, and among people all around the world… Seoul is at the center of all relationships. Seoul is a city where diverse nationalities and generations, mountains and rivers, ancient palaces and skyscrapers, and all disparate elements coexist in harmony.” 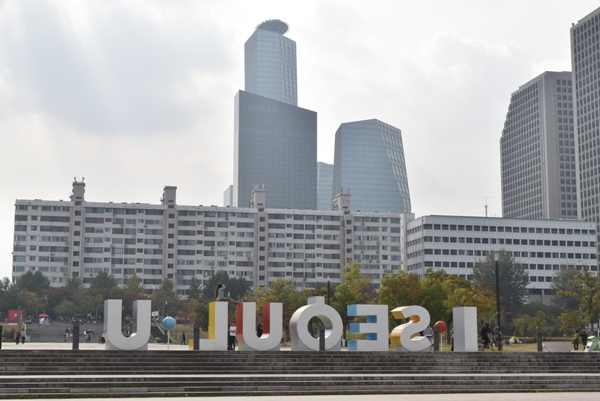 So, if you come to Seoul, you have to go to Yeouido Hangang Park to take picture in front of “I Seoul U”, okay? 😉 Nearest Subway: Yeouinaru Station (Subway Line 5), Exit 2 or 3

After taking leisurely walk at Yeouido Hangang Park, because I needed to buy cosmetics for my friends in Indonesia, so I was accompanied by 2 of my friends to go to Myeongdong. While the other 2 friends wanted to go to Dongdaemun and the other places. Once we arrived at Myeongdong, we immediately searched for a restaurant. At first we wanted to had lunch at Yoogane again, but because we’re starving already so we had lunch at a random restaurant. Finally we found “On The Grill” restaurant that provide Bibimbap. The Bibimbap here tasted so-so, not as good as we ate before when we’re at Mt.Seoraksan. But the important thing was we’re full 😀

After we took an exit at Hongik Univ Station exit 9, we finally met with my Korean friends. Yeaa, I was really glad to meet them all again. When I was in Beijing, they both were my classmates. We used to study, play, and joke together. Then we walked together to the restaurant, while tell about our own life after go back from Beijing.

We went to a restaurant, named Poulet Chicken (뿔레 치킨). The main menu in this restaurant is the Carbonara Chicken. OMG, This is really gooodddd! Although I was already full because of Bibimbap at Myeongdong, but no regret after eat this chicken.

After we ordered the food at Poulet Chicken, I started to introduce my Korean friends to my Indonesian friends. So, I was their translator. Two of my Korean friends can speak a little bit of English. They said they’re currently studying English. Our conversations were getting more exciting 😀 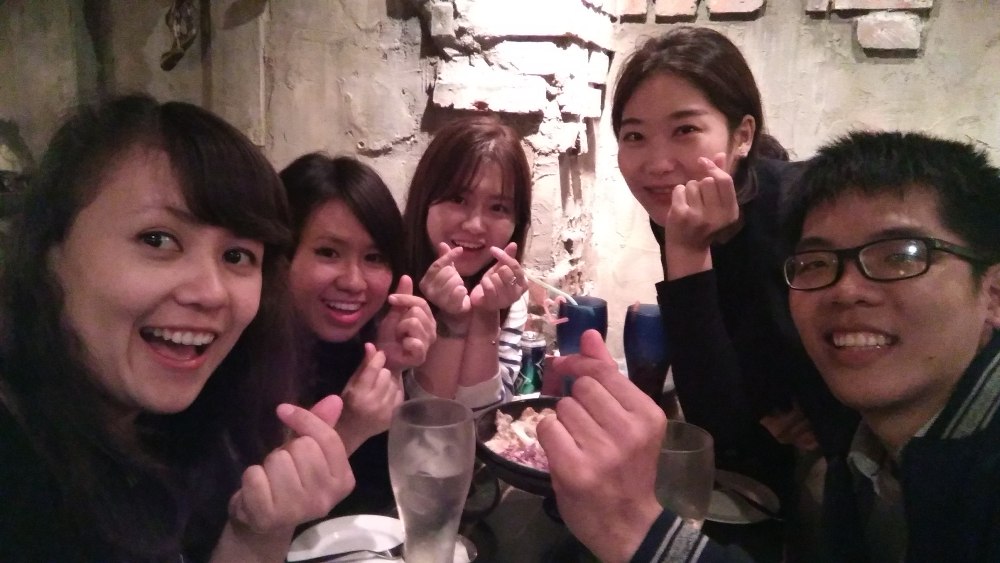 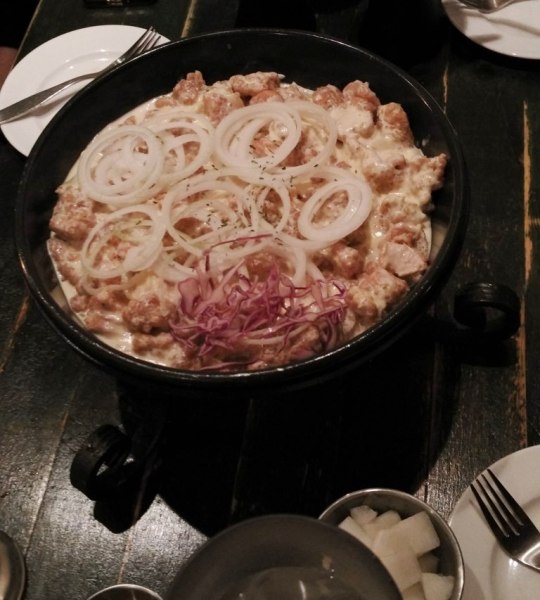 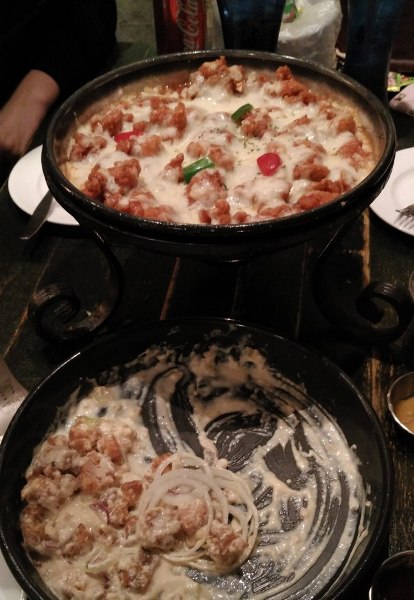 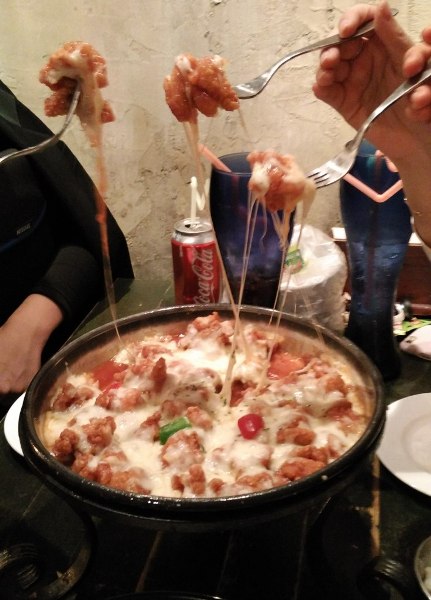 After that, we’re going to Sulbing to eat dessert. We wanted to try Melon Bingsoo 😀 We enjoyed the Melon Bingsoo while having the conversations again. Really enjoyed our time together. 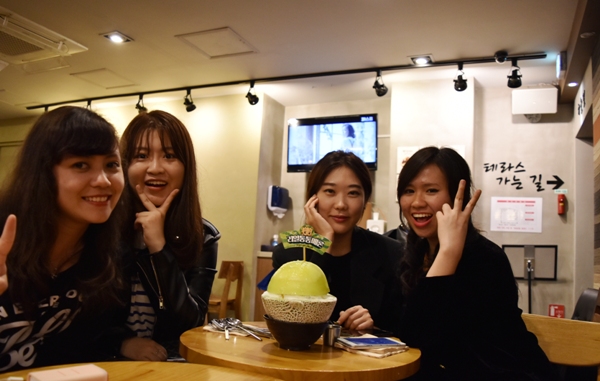 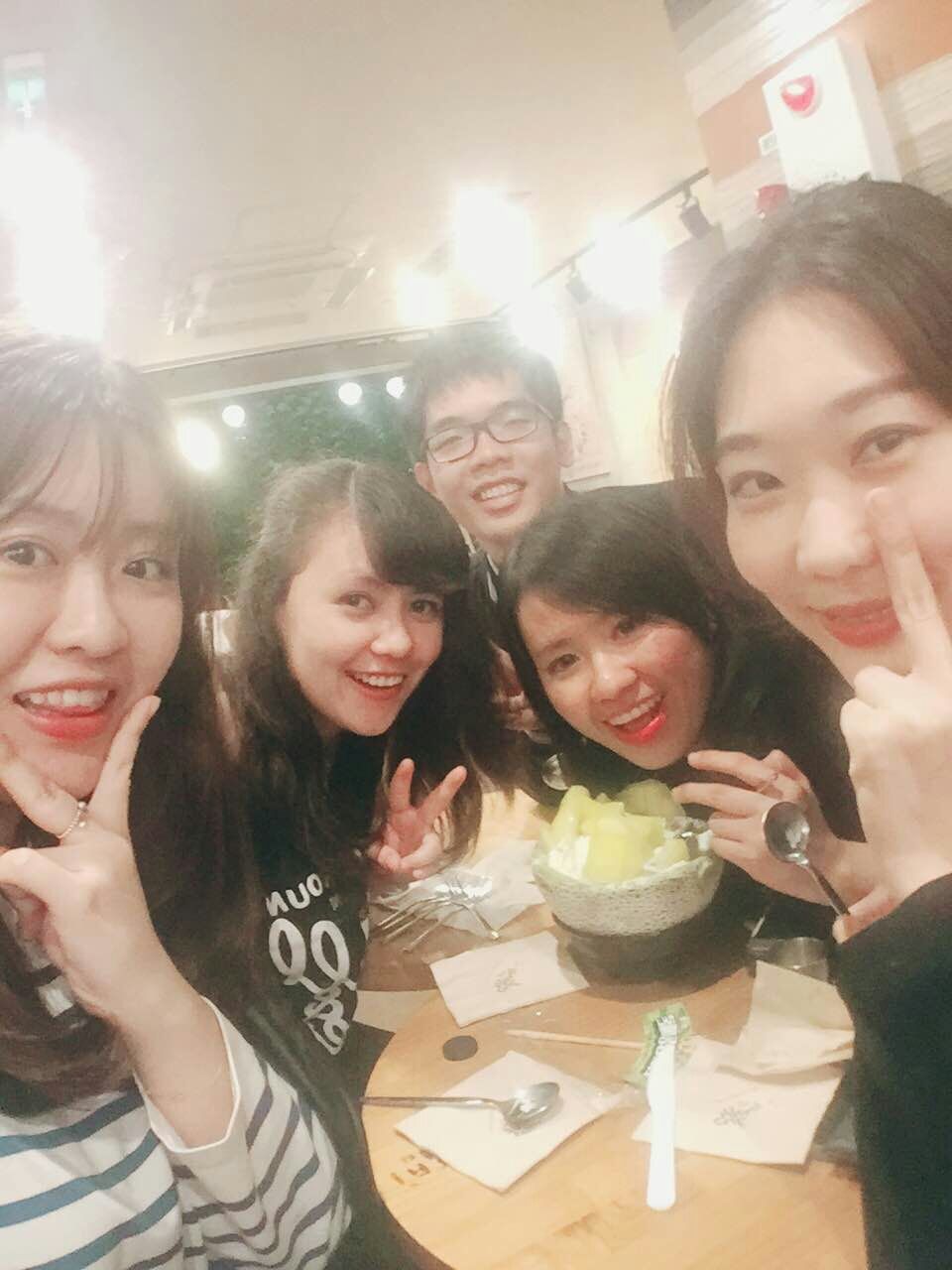 And finally it was 9pm already. Because my Korean friends couldn’t go back home too late, so we said goodbye after came out from Sulbing. We also needed to go back to the guesthouse earlier, because have to pack our stuffs. We’ll go back to Indonesia on the next day. Actually I didn’t wanna leave Seoul 🙁

After arrived at the guesthouse, we packed our stuffs. We also said goodbye to the Uwa staffs that night. Our last night in Seoul was closed by taking pictures with Uwa Guesthouse’s staffs.