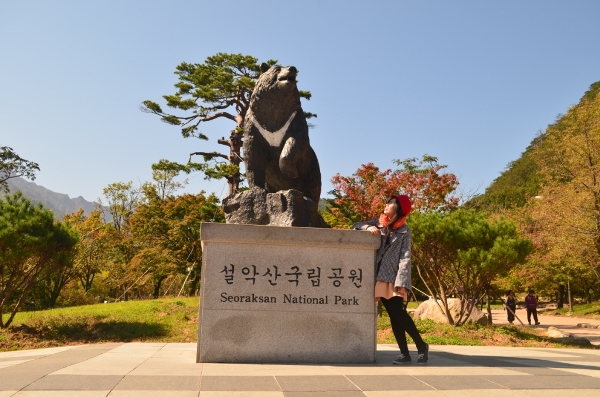 October 13th, 2016. Same as the previous days, we left from Uwa Guesthouse around 8am local time. It was also a long day for us, because our main destination for that day was Mt.Seoraksan which located in Sokcho city, Gangwon province. Actually it’s more convenient if we go with local tour from Seoul to Seoraksan, because it takes a long time to go there and the benefit of using local tour is that we will picked up by them from our hotel, no need to use public transportation.

Below are our details of the journey to go to Mt.Seoraksan:

From Hongik Univ station, we took a subway and stopped at Gangbyeon Station, without any transits. It took around 36 minutes and passed through 17 stations.

At that time, we arrived at Dong Seoul Bus Terminal around 8.30am. After waiting around 1 hour, we finally departed at 9.29am. The ticket bus fee from Seoul to Sokcho was 17,300 won. And finally at 12pm, we arrived at Sokcho Bus Terminal.

From Sokcho to Seoraksan can be reached by local bus 7 or 7-1. Because it’s outside Seoul, so we couldn’t use T-Money. We have to prepare the coins here, so it’s put into the coins box near the driver. The price for the bus is 1,200 won, one way. If you don’t have the exact amount of coins, the driver will give you the change, through the coins box. At that time, when I took this bus, I only have a big amount of money – 10,000 won. And all of my friends also didn’t have the exact amount of coins again. Finally I put 10,000 won in the coins box. And unexpectedly the driver gave me the change of coins, not the banknote! Can you imagine, at that time I had 8,800 won coins. LOL 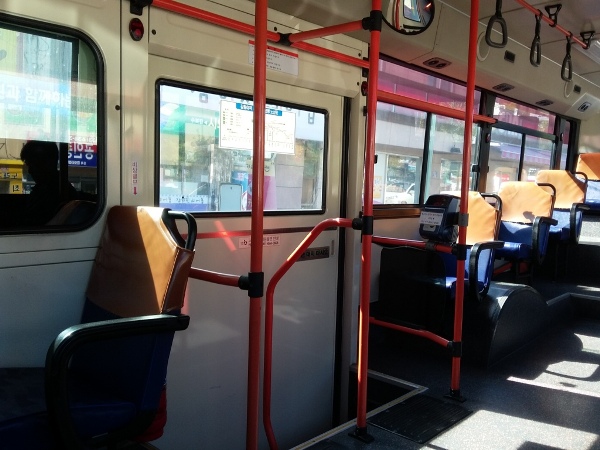 We bought the admission ticket of Seoraksan, 3,500 won. When we entered Seoraksan National Park, we saw a huge black bear statue which is the mascot of Seoraksan. After taking pictures there, we walked to the left side then we saw a restaurant that sell a variety of foods, and it looks so yummy. We ordered Vegetarian Bibimbap that costs 8,000 won. This is the best Bibimbap I’ve ever had! So yummy! 😀 I love the Gochujang Sauce because it makes the food more tasty. We can also add it as much as we want. The portion was quite big. I think this is for 2 persons. We had our yummy lunch, before go to one of the peak of Mt. Sorak.

After had lunch, we walked towards the cable car, named Seorak Sogongwon Cable Car. The price for cable car was 10,000 won. At that time, we had to wait around 1 hour to get into the cable car. Around 3pm, we started to waiting in line because our departure schedule was 3.10pm. 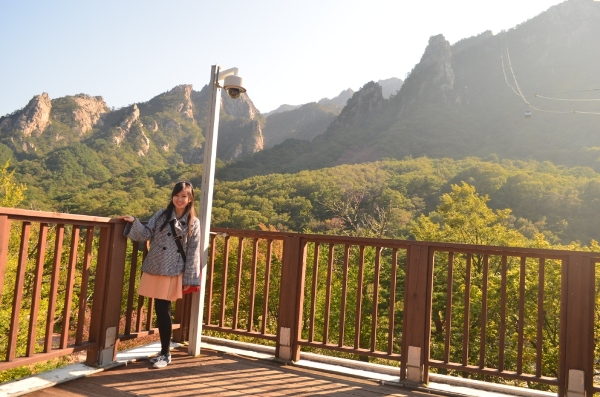 From Gwongeumseong Fortress 1.200 mdpl, we can see the rock cliffs as well as the amazing view. From the distance, we also can see the East Sea and Sokcho city. Really amazing! We spent around 1 hour to take pictures here. After that we went down again by cable car. 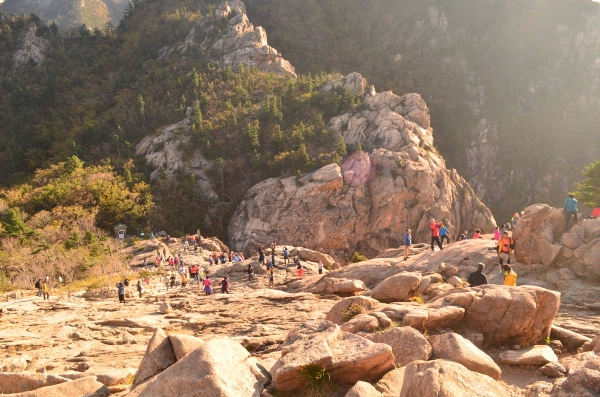 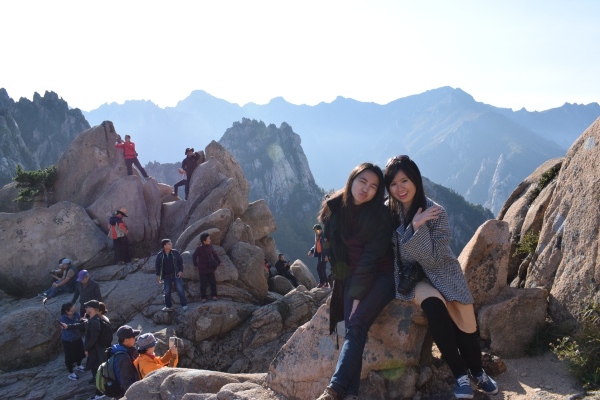 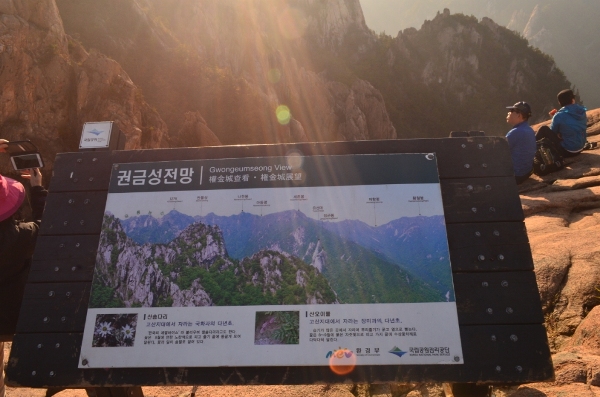 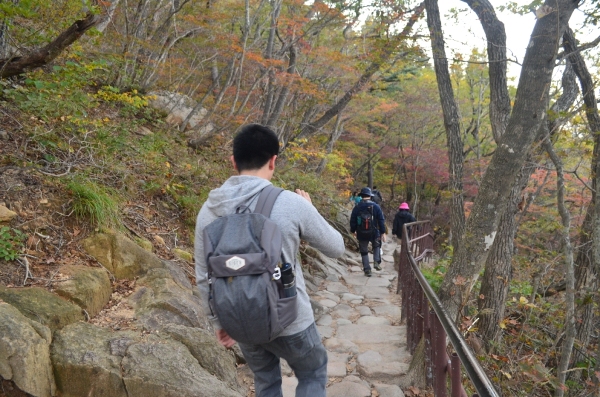 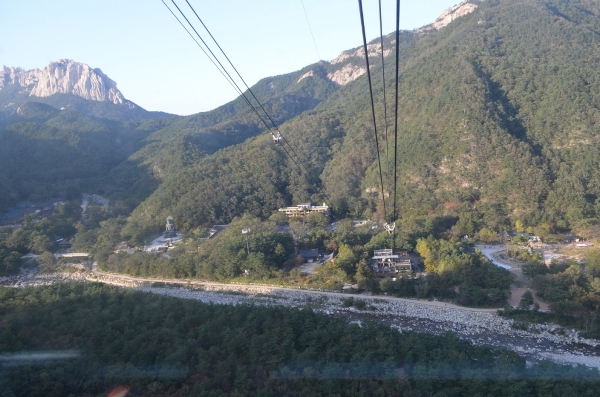 Finally around 5pm we walked to Sinheungsa Temple. Along the way, we saw so many Maple leaves. Yeaa, Mt. Seoraksan is the ideal place to enjoy the beauty of Maple leaves during Autumn. After 5 minutes walk, we saw a huge Buddha statue, named Bronze Jwabul Statue. The statue is the sign before entering Sinheungsa Temple. To get to the temple, we still need walked pass through the bridge. When we walked, we realized that the view was really amazing. What a breathtaking view! 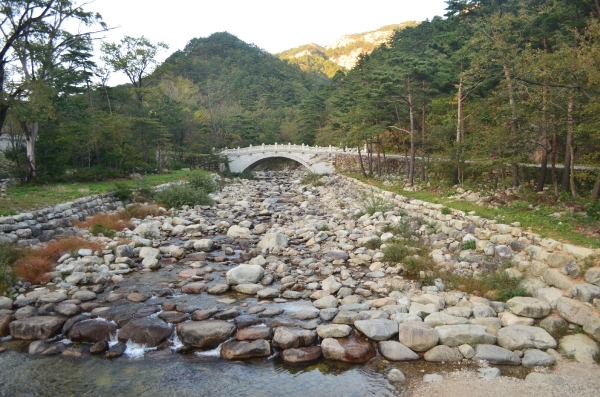 Along the way, I saw so many staked stones near the river. Then I thought for a while, why they do it? Then one of my friend said, Korean people have a believe that if we can stacked the stones, that means their wishes will come true. This is the believe from generations to generations. They usually stacked until 9 stones near the river, or the hills which have so many stones. Before stacked the stones, they mentioned their wishes on their heart. If the stones were not fallen down, so that means their wishes will come true. Well, this requires a lot of patience and concentration. This can also be called as practicing Zen. 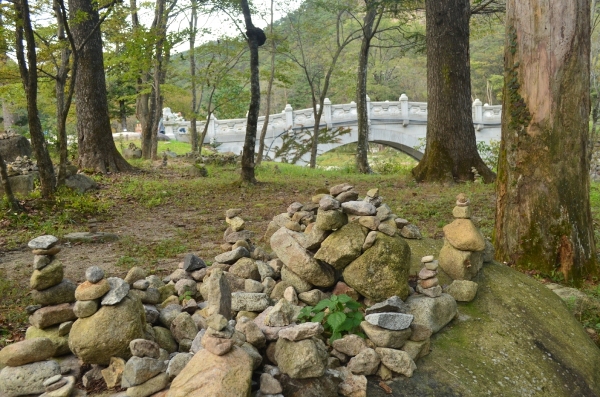 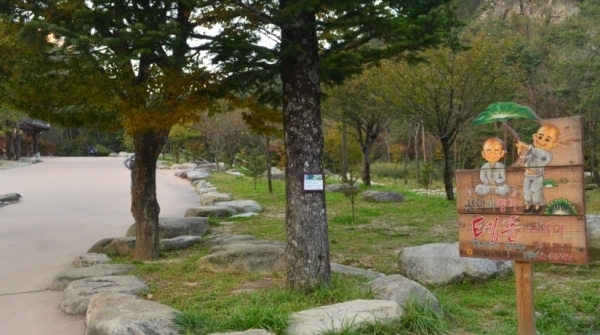 Finally we saw a signpost that read “Temple Stay”. That means we arrived at Sinheungsa Temple. But because my friends didn’t interested to go inside the temple, so I also skipped the temple. Along the way, the view was really amazing. On our right side, there’s a small river along with so many stones. Then we also passed through the bridge. Right after passed the bridge, there’s also a small temple. I’m not sure if its still a part of Sinheungsa Temple or not (maybe yes). Finally we took a rest in front of the temple. Here my friends tried to stacked the stones, and they did it successfully 😀 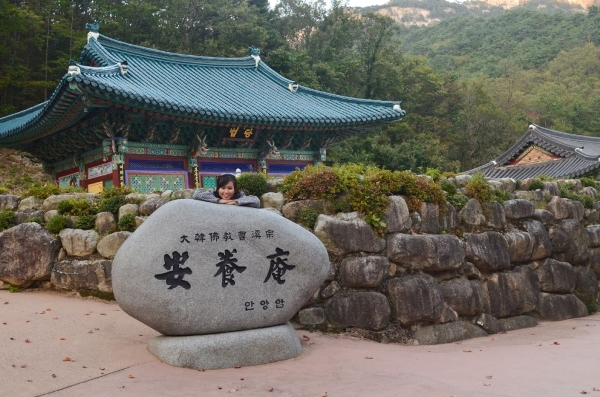 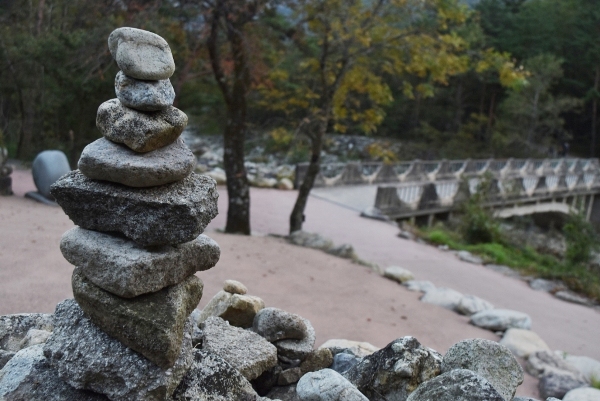 To be around this temple made me so peaceful. And it was late afternoon, the wind was blowing, adding the peaceful atmosphere. Really wanted to try “Temple Stay” for a night. But we had to go back to Seoul again with my friends. Maybe if I go by myself, I would like to change my travel schedule to enjoy “Temple Stay” at Sinheungsa Temple. 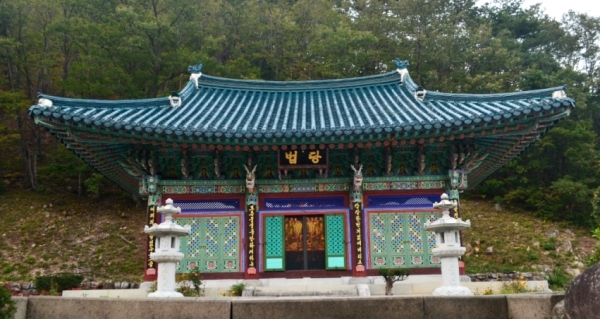 Because it was 6pm already, we needed to go back to Seoul again. At that time, there’re so many Ahjumma and Ahjussi who just finished hiking at Mt.Seoraksan. I was amazed, they’re old already but still want to go hiking. 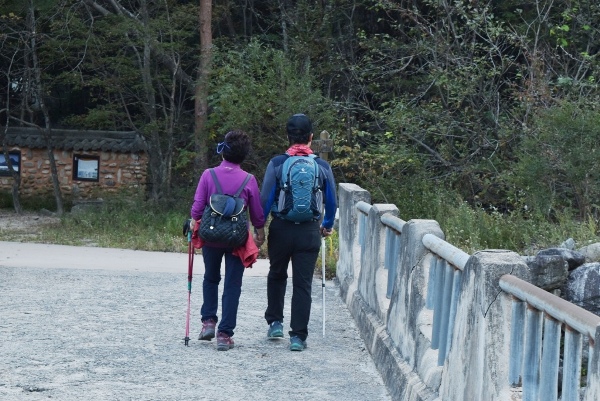 Finally we arrived at the Sokcho bus station at 7pm. Our departure time was 8pm. That means we only had 1 hour to had dinner. Around the bus terminal, there are some restaurants. Finally we had dinner at the Chinese restaurant which located opposite of the bus terminal. But we had a tough time of choosing the foods, because the menu was in Korean and Traditional Chinese Mandarin. And I couldn’t read the traditional Chinese characters (only know a little bit). The waiters also couldn’t speak Mandarin. But there’s a foreigner – Western guy – who just pointed out the foods (without knowing what it is). So we also did the same way as the Western guy. Because the time was really limited (around 30 minutes left), then we ordered foods that we also didn’t know what it is. LOL 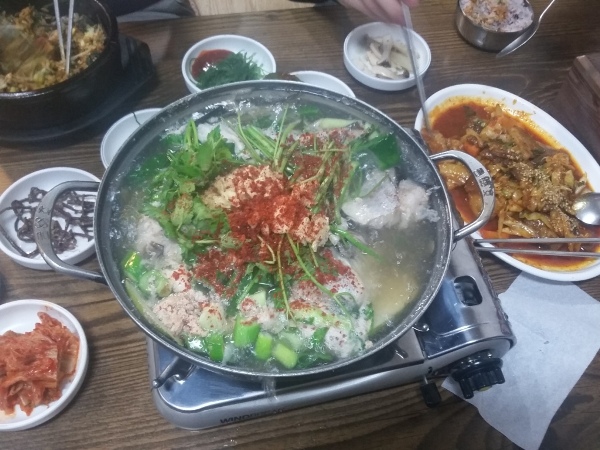 When the foods were coming out, we ate so hurriedly because only 15 minutes left. The taste was quite good, and the portion was big. After that, we run as fast as we can, so we won’t miss the bus. Fortunately we still could catch the bus on time.

When I look back, I think this is really a fun experience :)))

Finally we arrived at Uwa Guesthouse around 11pm. Hoaaamm.. it’s long day, isn’t it? And we’re gonna get up late on the next day, after days of long journey. On the next day, we’re just enjoying the city and go shopping again 😀