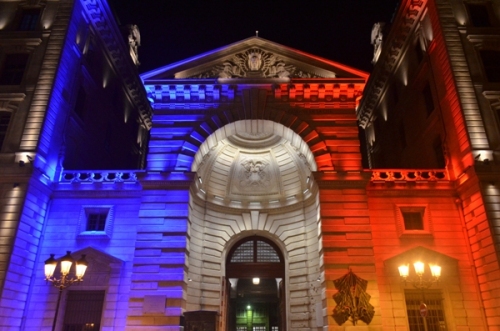 Yes, whatever the reason, Paris will always be the main magnet on the European continent, especially in France. Almost everyone dreams of traveling or even settling in Paris. Already many immigrants have come to Paris. And because of that, Paris became an insecure city. Cases of theft and crime are usually committed by immigrants in Paris.

Paris is divided into 20 Arrondissements, which are administrative regions that are used in several French or Dutch-speaking countries. The smaller the Arr number, the closer it is to the city center. So if it’s the 1st Arr, that means it’s really right in the center of the city. If it’s 20th Arr, that means it’s very far from downtown.

1st Arr: Downtown Paris. Here you can see the Louvre Museum & Pyramid, Tuileries, Pont des Art, Place de Vendôme, Rue de Rivoli, and can even see the Eiffel Tower too from a distance.
2nd Arr (Bourse): This is the smallest arr in Paris. Famous for its textile industry in this arr.
3rd and 4th Arr (The Marais): The history of Paris is in The Marais. Often also referred to as the Old City of Paris.
5th Arr (Latin Quarter): The oldest university in Paris is in the Latin Quarter. This area is filled with students.
6th Arr (Saint Germain-des-Prés)
7th Arr: Eiffel Tower is at 7th arr.
8th Arr: The most expensive area in Paris. Here there are many luxury hotels with views of the window, the Eiffel Tower. One luxury hotel is Plaza Athenee.
9th and 10th Arr: Stay away from the name Rue Saint Denis in this area, because it is a place of prostitution.
11th Arr (Oberkampf)
12th Arr (Bastille): In this area many cheap and safe accommodations are available.
13th Arr: China Town is Paris
14th Arr (Montparnasse)
15th Arr (Parc des Expositions)
16th Arr (Trocadero): This is an area where we can see the view of the Arc De Triomphe and the Eiffel Tower from afar. If it’s 8th Arr expensive, it’s a little cheaper here.
17th Arr (Palais de Congrès)
18th Arr: Tourist attractions in this area are Sacre Coeur, Montmartre, and Moulin Rouge.
19th and 20th Arr: The farthest area from the city center.

I think almost everyone thinks that in Paris, stay overnight near the Eiffel Tower. Then imagining being able to see the Eiffel Tower from the bedroom window. Especially if accompanied by a partner. So sweet!

Everyone has their own preferences. For me personally, I better stay in the middle of the city center. Just look for lodging located in the 1st arr, aka near the Louvre. It’s so convenient. Just walk a bit, I can get to several tourist attractions. If you stay overnight in the Eiffel Tower area, you can only walk to the Eiffel Tower.

Another thing to consider when choosing accommodation in Paris is whether the location of the hotel is easily accessible by public transportation or not. Then, pay attention to the age of the hotel. If it’s too old, it’s usually a bit of a horror. Most hotels in Europe, we are required to pay city tax when we want to check out from there. So pay attention also before booking a hotel, does the price include city tax or not?

You can also use airbnb, if you want. There are so many lodgings for rent on Airbnb. But actually the price of Airbnb lodging in the city center costs more or less the same as hotels in the city center. Airbnb feels at home, there is a kitchen, guest room, and so forth. But most people have to take the stairs, there is no elevator. A bit hassle if the luggage is a lot and heavy.

While Trocadéro, here you can enjoy the view of Eiffel Tower which seems to be in line with the body position of the Eiffel Tower. Because Trocadéro is located on the 16th arr, it’s a bit far from Eiffel Tower, but here the view is really great. It is actually the most popular place to enjoy the Eiffel Tower’s view. If you often see photos of people on Instagram with Eiffel’s background, surely they take pictures in Trocadéro;)

If you want to enjoy the Eiffel Tower from afar, you can also along the Seine River. Oh yes, Eiffel Tower is actually better at night. There are lots of lights. So pretty!

This is the most famous Catholic cathedral in Paris. The entrance ticket itself is free, but if you want to go up to the tower, pay 8.5 Euros and if you want to go to the crypt, pay 6 Euros. There are also paid admission tickets so you don’t need to queue to get into Notre Dame. Because it said the queue there was very long, if you are lazy to queue or the time is tight, you can buy a paid entry ticket.

Right behind Notre-Dame Cathedral there is a bridge named Pont de l’archevêché. This bridge used to be famous for its Love Locks. But since 2015, the Love Locks on this bridge have been moved or thrown somewhere.

The Arc de Triomphe is one of the most famous monuments in Paris. This is the gate of victory. This monument is used to commemorate and honor those who fought and died for France in the French revolution and the Napoleonic War. Under this monument is the tomb of an unknown soldier from World War I.

The location is not far from Champs Elysees, a very famous street for shopping in Paris. If in Singapore there is Orchard Road, maybe you could say in Paris there is Champs Elysees.

The Palais Garnier can also be called the Opera Garnier or the Paris Opera. The opera house, located on the 9th arr, is one of the most famous opera houses in the world. Built from 1861-1875, the Opera building is famous for its Phantom of the Opera legend. In this building it used to be a gathering place for rich people. Not surprisingly, this building is very majestic and luxurious, like in a royal palace. Even here there is also a Hall of Mirrors, like the one in the Chateau de Versailles (Palace of Versailles).

The entrance ticket to the Palais Garnier is 11 Euros for Adults, 7 Euros for those aged 12-25 years old.

In Paris, the average price of a meal in a restaurant around 10-20 Euros. But usually the portion is very large for the size of the Indonesian people. So 1 portion can be for two. Restaurants in Paris usually open at certain hours, some are open only for breakfast hours, some are only open for lunch and dinner hours, etc. The point is that you have to check beforehand, the restaurant you want to visit is open and closed at what time. There are several restaurants that require us to make a reservation first. It can be by telephone, or online. For those of you who don’t speak French, just make an online reservation or find another restaurant that doesn’t need a reservation.

There are procedures for eating in restaurants in France, especially in Paris. Initially, when you enter a restaurant, you have to say “Bonjour!”, Which means “Hello!” in French, it can also be “Have a good day!” or “Good morning!”. Usually the waiter or owner always says “Bonjour!” to all visitors. Then they will give the menu. Then, after choosing what you want to eat and drink, just call the waiter. All is in fast paced. So when you have called the waiter, you shouldn’t still picky about food or drinks. Unlike in Indonesia, where waiters want to wait for us to choose food or drinks when ordering the food. Then, when the food or drink comes, we can say “Merci”, which means “Thank you”. After eating and want to ask for a bill, we can say to the waiter, “L’addition, s’il vous plaît!”, Which means “Bill, please”. In Paris there is also a habit of giving tips to his servants. So when the bill is out, we can increase the money a little for tips.

There is one restaurant that is famous among Instagrammers, namely Au Vieux Paris d’Arcole. This restaurant is one of the old restaurants in Paris. For those of you who want to experience Parisian specialties, this is the place. Its location is also strategic, close to Notre Dame Cathedral. The decoration of this restaurant is also very beautiful from the outside. So Instagrammable! I’ve even seen a prewedding photo in front of this restaurant. 😛

Paris is the center of the world of Fashion and branded goods. It’s incomplete if you don’t go shopping in Paris, especially for the girls. The best shopping centers in Paris for branded goods are the Champs Elysees and Galeries Lafayette. In addition, you can also shop on Rue de Rivoli, Merci, Boulevard Saint Michel and Saint Germain, or Montmartre.

Usually souvenirs from Paris are key chains in the shape of the Eiffel Tower. If this one is too mainstream, you can buy a hat with the words “Paris” on it, or it could be anything that describes Paris. So it’s not just a key chain: P

If you want to buy souvenirs from Paris, just buy at the supermarket so it is cheaper, like in Monoprix or Franprix. The difference is, Monoprix is ​​bigger than Franprix. For snacks, I recommend the Bonne Maman brand. Because France is synonymous with Crepes, you can also buy Pre-Packaged Crpes for souvenirs.